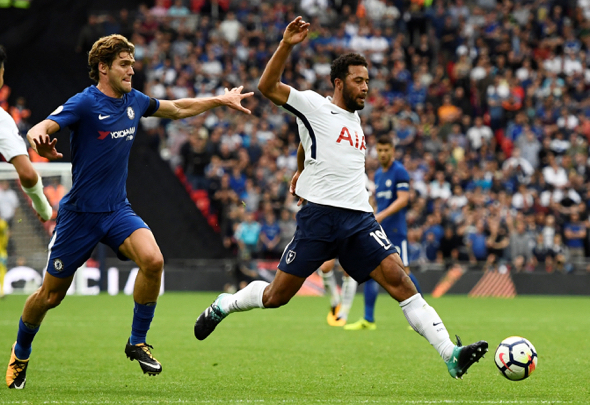 Tottenham have confirmed that midfielder Mousa Dembele has returned to training after initial fears that he would be sidelined for some time with a hip injury.

Spurs announced on their official Twitter account in their squad update ahead of the League Cup clash with West Ham on Wednesday night that Dembele, 30, is nearing a return to first-team action in what in no doubt a major boost to the club.

It was also confirmed that Victor Wanyama is continuing his recovery from a knee injury after it was revealed he was due to see a specialist this week.

TEAM NEWS: @mousadembele (hip) back in training. @VictorWanyama (knee) continuing his rehabilitation and his progress is being monitored. pic.twitter.com/mf6bZ0ESiS

Dembele has not featured since mid-September, missing the last six matches for Spurs as they have had to cope without him against the likes of Real Madrid and Liverpool.

It seems doubtful that he will be able to play against West Ham on Wednesday but the news that Mauricio Pochettino’s side is returning to full strength is going to be a boost to the club and the fans.

Belgium international Dembele is a key part of Pochettino’s midfield with his tireless displays and ability to contribute in both attack and defence.

Harry Winks has emerged in the first-team during the absences of both Dembele and Wanyama and the newly-capped England international has been a brilliant account of himself.

In other Tottenham news, Ossie Ardiles has revealed what Diego Maradona thought of Spurs’ win against Liverpool on Sunday.