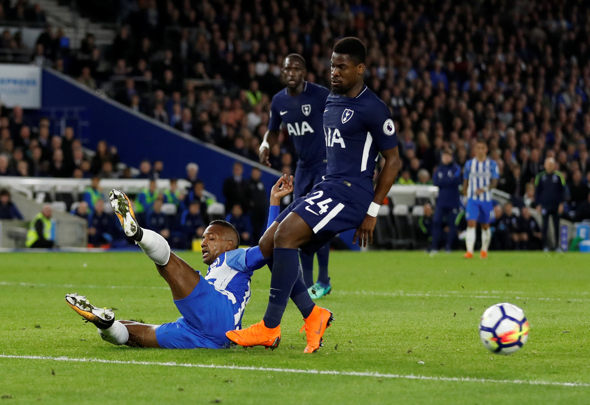 Tottenham were looking for a win against Brighton in the Premier League for an almost assured top-four spot and a place in the Champions League next season.

And, after a strangely muted first half, it looked like a formality after Harry Kane scored from close range after great work from Heung-Min Son.

However, Serge Aurier gifted the home side a penalty almost immediately afterwards, which Pascal Gross converted to equalise, and Tottenham fans were livid with their defender.

It’s not the first time he’s given away a penalty this season and he’s been criticised before for rash tackles in the penalty box.

And this wasn’t he first thing he’d done wrong in this game either – Spurs fans were criticisng him on Twitter throughout the first half.

But it was the rash tackle that proved costly and had Spurs fans demanding he was axed in the summer, with loads calling him a constant liability.

Here are the best reactions to his display against Brighton:

My face when I hear Alderweireld is playing 😊

My face when I hear Aurier is also playing 🤦‍♂️

Aurier is a liability. I haven’t been convinced by him at all so far this season. He needs to improve massively

Serge Aurier has been a massive flop

Looked up Liability in the dictionary, there was a picture of Serge Aurier there.

Tight first half, need a good start to the second half. Get a goal early second half and then Aurier gives away a penalty! Give me strength!! This boy is not good enough for Tottenham!! Cut our loses and get shot of him in the summer!! #COYS #THFC #Spurs

Aurier is such a liability

Get rid of him #Aurier #Liability

Aurier is a joke