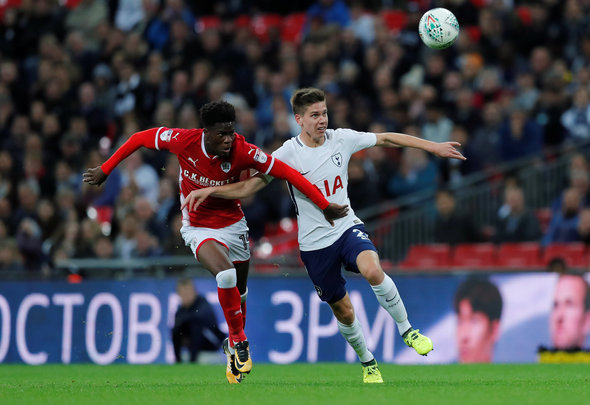 Tottenham fans were delighted by the display of defender Juan Foyth after the 2-0 win against Newport in the FA Cup.
Foyth, 20, signed for Spurs as an unknown quantity from Estudiantes in Argentina last summer for a hefty £12million.
Tottenham fans were surprised at the fee but said at the time that manager Mauricio Pochettino must know what he’s doing.
They haven’t had a lot of chances to see him in action since – he’s yet to make an appearance in the Premier League and has been given runouts in the FA Cup, EFL Cup and the Champions League.
However, fans were hugely impressed with his performance at the back last night, alongside Toby Alderweireld – returning for the first time since his hamstring injury ruled him out for the majority of this season.
One fan said that Foyth is getting better with every display for Spurs and another said he is going to be “something else”.
It seems that someone in the Tottenham recruitment department did know what they were doing.
Here are the best reactions from Tottenham fans:

Looking at Foyth I'm wondering whether he'll make a good holding midfielder? . . . Distribution will have to improve but always looks comfortable with the ball . . .

Great performance Juan, getting better with every game #COYS

Foyth was class. Lamela was everywhere. Winks was tidy. Toby looked like he’d never been away.

Foyth will be a future star for us

Foyth was great again today. A pre season under Poch & learning from the two best CBs plus some time in the gym will make him ready to get serious minutes next season

Juan Foyth with another confident display. So impressive, and credit to whoever spotted him #coys #thfc

Foyth really impressed me tonight. So calm & confident on the ball. His time will come. COYS

In other Tottenham news: ‘Got to go this summer’ – Tottenham fans have had it with one player after display v Newport
Don’t miss out on breaking and exclusive Leeds news by clicking here for our brilliant 24/7 updates on Facebook, Instagram and YouTube.