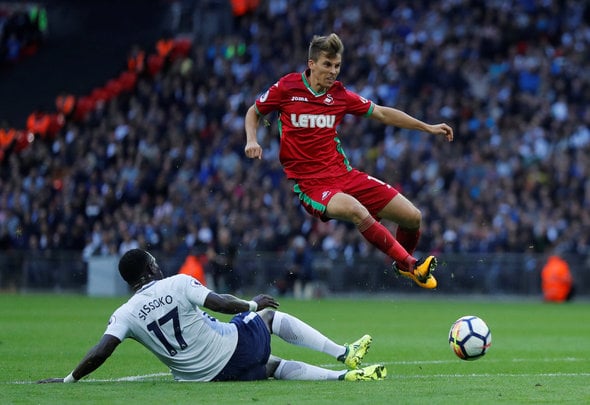 Tottenham fans have torn into Moussa Sissoko for his hapless display in the 0-0 draw with Swansea at Wembley on Saturday evening as they returned to Premier League action.

Sissoko, 28, was hooked by manager Mauricio Pochettino in the 64th minute to be replaced by summer signing Serge Aurier – and most supporters saw a noticeable difference in the overall peformance of the side after the Frenchman was taken off the pitch.

Ever since signing for Spurs, Sissoko has never really won over the affinity of the fans as he has largely failed to live up to the £30million price-tag that was slapped on him when the London club signed him from Newcastle last year.

The 52-times France international looked to have turned a new leaf with his early performances this term but after a goalless draw with struggling Swansea, fans appear to have turned back on the ex-Newcastle midfielder.

I'd like nothing more than Sissoko to have a MOM performance but fact of the matter is, he's garbage #COYS

I would have hooked Sissoko…..#TOTSWA#COYS

@SpursOfficial about 63 minutes too bloody late, if you ask me #sissoko #coys #TOTSWA https://t.co/ZtgoDQMXuW

In what is a very young Tottenham team, Sissoko is one of the more senior players but his performance clearly wouldn’t have done much to inspire some of the less-experienced stars on Saturday.

His place in the first-team perhaps only came about because of Wednesday night’s hard-fought victory over Borussia Dortmund in the Champions League when Pochettino made changes to his squad.

In other Tottenham news, this forward has signed for a London club having quit Spurs.