Tottenham fans reacted with delight on Twitter after Sunday’s results ended with their side just one point behind Arsenal in the Premier League table.

Spurs began the week seven points behind their bitter rivals in the league but have closed the gap by six points following a turnaround in fortunes.

Arsenal followed up their 2-1 defeat at Everton on Tuesday by losing to the same score in Sunday’s clash at Manchester City.

By contrast, Tottenham beat bottom-of-the-table duo Hull and Burnley by scores of 3-1 and 2-1 respectively to secure six points in four days.

Arsenal are fourth in the table with a haul of 34 points from 17 matches, while Spurs have taken 33 points from their 17 games to cement their place in fifth.

The White Hart Lane faithful revelled in their win on Sunday, as well as the misfortune of the team down the Seven Sisters Road.

Ruined his Christmas ?? Arsenal fans in meltdown are the best present ever for yids ?? #coyshttps://t.co/amMxuLMBzh

@PhilHutchings14 what’s the difference between Arsenal and a dog walker?? A dog walker can hold onto a lead!! #COYS

Happy Christmas to us. #Spurs win and #Arsenal lose. #COYS

Arsenal fans singing hokey cokey this afternoon on Twitter. Wenger in, Wenger out, in, out, in, out, shake him all about #Wegner #COYS

Goals from Dele Alli and Danny Rose sealed the three points for Mauricio Pochettino’s side after Ashley Barnes had put Burnley ahead on Sunday.

Despite their two wins this week, Tottenham are 10 points adrift of runaway leaders Chelsea.

In other Tottenham news, Spurs fans on Twitter claim the club have unearthed their next superstar. 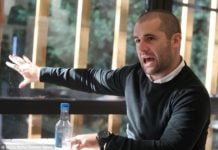