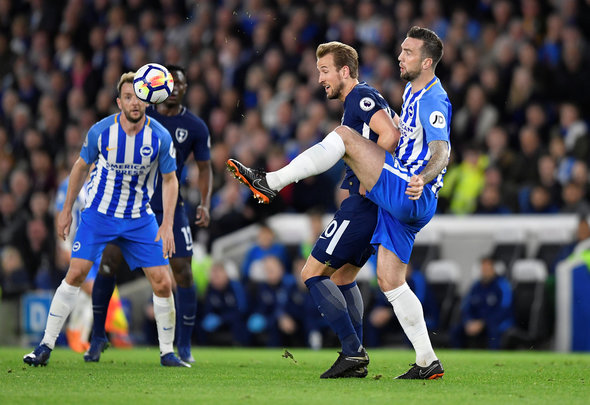 Harry Kane opened the scoring for Mauricio Pochettino’s side only for Pascal Gross to level moments later for the Seagulls.

But Spurs fans were by and large unhappy with the performance of their hitman.

There were supporters who were questioning the England forward’s fitness, stating that he was not match fit and ought to be substituted.

That came after the 24-year-old succumbed to an ankle injury only to return quickly to the side for the 3-1 win against Chelsea.

Against Stoke, it looked as though the forward had returned to goalscoring ways as he notched up his 40th of the season – a goal which he received a barrage of criticism for claiming in his quest to seal the Golden Boot award.

However, he blanked against Man City and looked like doing the same again today, until he pounced in the 48th minute for his 41st goal of the season.

However, it’s fair to say he didn’t look at his best tonight and fans will be hoping for an improvement against Man United in the FA Cup semi-final at the weekend.

Here is what Tottenham fans had to say on Twitter about the performance of Kane against Brighton:

Sub Kane off at HT. Disrupting our game. #THFC

Poor half again from #THFC , really isn't the time to be hitting a dip in form!
Ball not being moved quick enough, lacking ideas but that's not surprise with Wanyama & Sissoko as our middle two.
Kane looks way off it again. Son poor.
Need to feed Eriksen & Lucas much more!#COYS

Sissoko off for Dembélé. Slows the game down and far too many wayward passes. Supply into Kane is poor also, and when he does get the ball to feet, he struggles to get it out again. Doesn’t look 100% fit #thfc

Don’t like saying it,but think taking Kane off would improve us need more movement and pace up top #coys #thfc

2nd half need to up the pace. This has been a lethargic performance. Too slow in the build up. Kane needs to start moving, Eriksen is too deep #THFC #COYS

In other Tottenham news, ‘What?? Awesome’, ‘So pumped’ – Tottenham fans giddy with excitement after official club update.