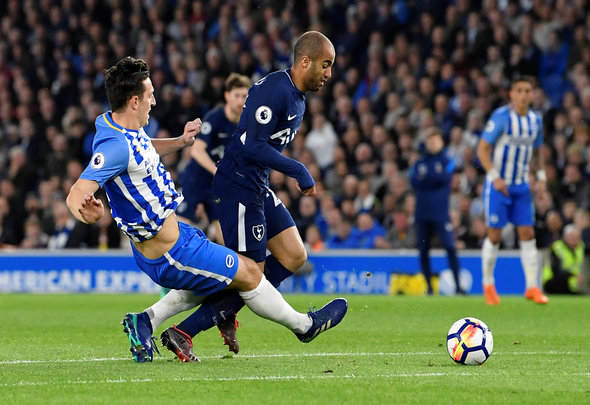 Tottenham and Brighton earned a share of the spoils in the Premier League on Tuesday night at the Amex Stadium with a 1-1 draw.

A Harry Kane goal which was followed up by a Pascal Gross equaliser was not enough for the Lillywhites to go level on points with Liverpool in third place.

Spurs manager Mauricio Pochettino handed January transfer signing Lucas Moura his first start for the club in the Premier League since his move to North London from Paris Saint-Germain in January – it was his seventh appearance for Spurs in all.

The Brazilian scored his first goal for Tottenham back in the FA Cup tie against Rochdale in February but has been restricted with game-time by his boss who considers him one for next season.

Moura showed his class on the game shortly after the half hour mark when he shot a vicious effort at Mathew Ryan in the Brighton goal who tipped over the shot.

And Spurs fans were pleased with the display of the winter arrival, feeling there was a lot more to come from the attacker.

Here is a selection of Twitter reactions  from Tottenham fans to the 25-year-old, making his first top-flight start:

Very flat performance so far. Eriksen is a touch off, Kane is a touch off. Lucas Moura has been the only bright spot. Cmon Spurs, push up a few gears ffs

Lucas Moura looks dangerous when he runs with the ball 👍

In other Tottenham news, ‘What?? Awesome’, ‘So pumped’ – Tottenham fans giddy with excitement after official club update.