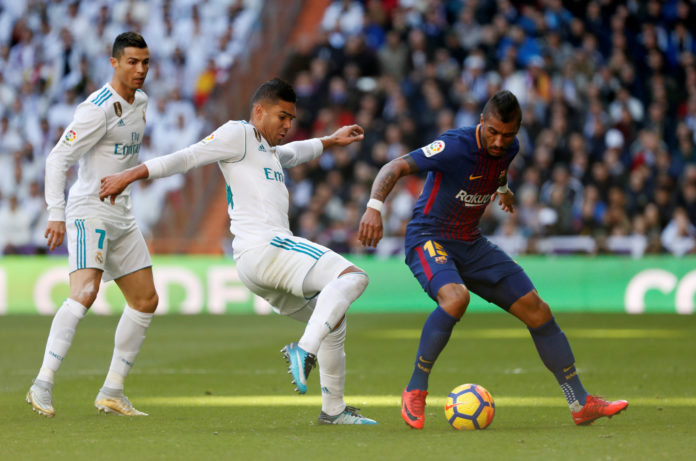 Tottenham fans have taken to Twitter to heap praise on former player Paulinho for his performance for Barcelona in the 3-0 win against Real Madrid at the Bernabeu on Saturday afternoon.

Barca romped to a stunning victory in El Clasico thanks to goals by Luis Suarez, Lionel Messi and Aleix Vidal as Daniel Carvajal was sent off for Madrid in the second half.

However, in a star-studded La Liga clash, all Spurs fans cared about was the performance of North London flop Paulinho, 29, who shocked many when he secured a move to the Nou Camp in the summer.

Although he failed to reach expectations at White Hart Lane, many Tottenham fans believe that the Brazilian looked a completely different player for Barcelona and were blown away by his performance on Twitter.

Why didn't Spurs sign this Paulinho playing for Barca instead of the insipid one we got from Corinthians?🙃#THFC #COYS

I actually hate the majority of Spurs twitter. I used to see people screaming that Mason was better than Paulinho ffs #COYS

Slightly surreal watching Paulinho playing for Barca. No better than he was for the mighty #Spurs.

Paulinho is twice the player he was at Spurs. 🙃

Ones winning the El Classico.

Paulinho made 67 appearances across all competitions for Tottenham between 2013 and 2015 before leaving to join Chinese Super League side Guangzhou.

After two years in East Asia he was surprisingly snapped up by Barca despite failing to take off in the Premier League for a staggering £35million.

The Brazilian has since made 22 appearances across all competitions, scoring six goals in the process.

He even netted twice last week in the 4-0 win over Deportivo.

In other Tottenham news, Spurs are joint favourites to sign this Premier League forward after his manager made a big transfer admission.