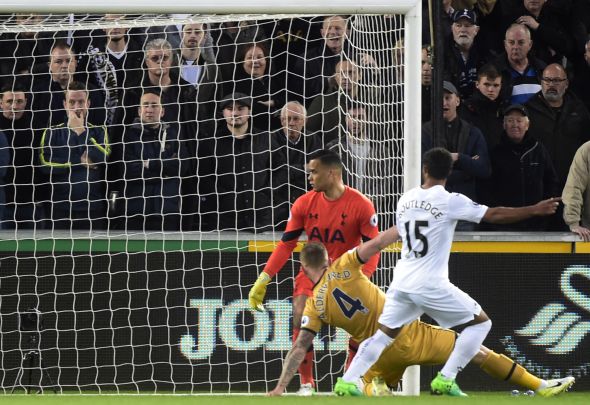 Tottenham fans were frustrated on Twitter after former star Wayne Routledge came back to score against his old side during Swansea’s win on Wednesday night.

Routledge, 32, opened the scoring during the Welsh side’s 3-1 loss to Spurs, after good work from Ghana international Jordan Ayew gave the skillful winger a tap in from close range.

However, Christian Eriksen, Dele Alli and Son Heung-Min all scored in the final stages of the match to turn the game on its head at the Liberty Stadium.

Swansea’s number 15 played for three years between 2005 and 2008 at White Hart Lane, but made just five appearances in all competitions as he was loaned out to Portsmouth and Fulham.

Spurs fans reacted on Twitter after Routledge came back to haunt his old club, with many claiming that it was typical he had scored for Swansea against his former side.

Routledge, typical – well at least he didn't score against us on a High Holy Day. #coys #thfc

What am I witnessing? We're making Jordan Ayew look like a dangerous striker and let bloody Wayne Routledge score???

Davies getting skinned by Routledge and Naughton smh 😶

At least Spurs have kept up the pressure on league leaders Chelsea with another win, despite Alli’s equaliser coming in the 88th minute.

In other Tottenham news, Pochettino has revealed why goalkeeper Hugo Lloris missed the midweek clash against Swansea.