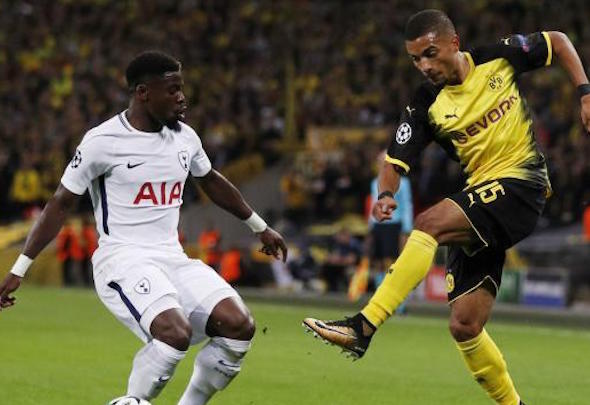 Tottenham fans were left divided by the performance of Serge Aurier in the club’s 1-1 draw with Real Madrid on Tuesday.

The Ivory Coast defender played a key role in the result, seeing his cross turned into the Real Madrid net by Raphael Varane to give Spurs the lead in the first half.

However he went from hero to zero as he made a rash challenge to bring down Toni Kroos in the box, which allowed Cristiano Ronaldo to convert from the penalty spot.

As a result, fans were left debating on Twitter about how he had performed against Los Blancos, with many blasting him for his defensive error, while others were praising his performance.

Stupid from Aurier, but how quickly people forget he's the reason we were winning before that 🙄

Sanchez absolutely brilliant, as well as Hugo! Aurier despite penalty super class! Winks good. Eriksen below his class. So was Sissoko.

Aurier is such an enigma. Does some amazing stuff with the ball – the sort of thing no other FB can do. Then he makes a dumb mistake. #THFC

We could and should have one this game IMO, Eriksen had a mare by his standards, and Aurier is a liability at the moment,hope he improves

Bar the pen, Aurier was excellent too. Sissoko ran his heart out. Roll on two weeks time.

Starting to sense Serge Aurier is one of those players that can be totally out of this world one second and an absolute nightmare the next.

The draw means that both Tottenham and Real Madrid remain joint on seven points at the top of their Champions League group, having both beaten Borussia Dortmund and Apoel Nicosia in previous matches.

Since arriving from Paris Saint Germain in the summer, Aurier has made five appearances for the club, having started all three of their Champions League matches so far.

However the 24-year-old did see himself sent off in his second league appearance, receiving his marching orders for two bookable offences in the 3-2 win against West Ham.