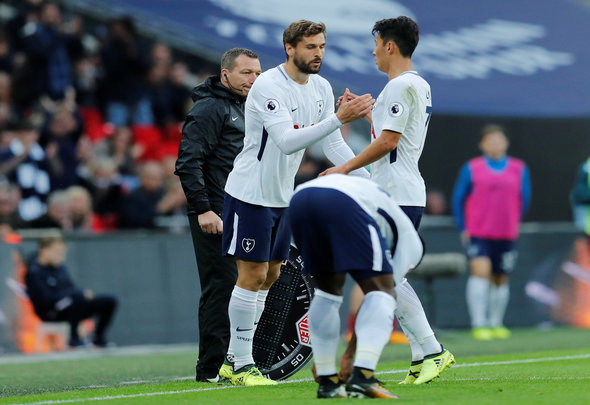 Tottenham fans took to social media to rip into striker Fernando Llorente during their 1-1 with Real Madrid on Tuesday.

The Spanish target man was a surprise inclusion in the starting XI as Mauricio Pochettino lined him up alongside first choice striker Harry Kane for their Champions League clash.

It was just the second start the 32-year-old has made for the club, with his first coming in a League Cup tie against Barnsley.

However, fans were less than impressed with what they saw from the former Swansea man, and took to Twitter to voice their frustrations.

Aurier trying his best to become the next Eboue. Playing Llorente is like playing with 10 men. Still in it though so can't complain. #COYS

Any chance Llorente could stop mincing around the pitch? Get him off Poch, we need players that are willing to run #COYS

Llorente disappeared this half, have to bring Son on to add pace

Llorente is a passenger at the moment. Son and his pace would surely be a better outlet. #COYS

Get Llorente off. Can't keep up this if he can't chase the ball at all.

Llorente needs to put a shift in, playing like an OAP atm #RMATOT

However there was one supporter who was pleased with the Spaniard’s performance:

Llorente's experience has been useful so far. Holding the ball up well and useful in defensive action too. #COYS

An own goal from Raphael Varane following Serge Aurier’s cross gave Tottenham the lead at the Bernabeu before the Ivory Coast defender conceded a penalty which was converted by Cristiano Ronaldo.

However it could have been more had it not been for the heroics of both sides’ goalkeepers Hugo Lloris and Keylor Navas, who both pulled off impressive saves to deny the opposition.

Having joined Spurs from Swansea over the summer, Llorente has made just six appearances in the club’s 12 matches across all competitions this season, and is yet to find the back of the net for his new club.