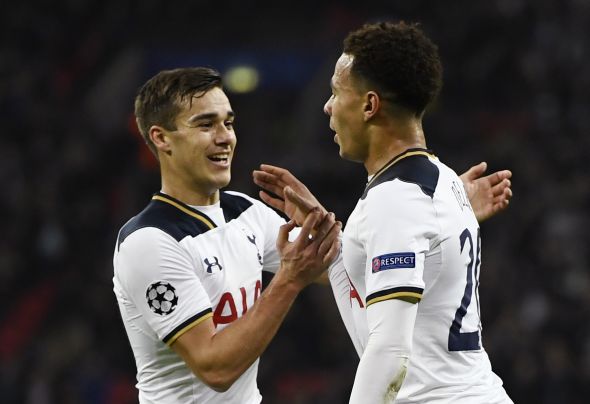 Winks, 20, has sparkled in a Tottenham shirt recently, proving to be one of Spurs’ outstanding players in their 3-0 win over London rivals Fulham on Sunday in the FA Cup.

Manager Mauricio Pochettino will be looking for his side to overturn a first-leg deficit against Belgian side Gent that saw them lose 1-0 in Europe last week.

The Argentine boss could include midfielder Winks in looking to secure a safe passage into the Europa League’s Round of 16, before facing Stoke at White Hart Lane on Sunday.

Tottenham fans are desperate to see their academy product start his third game in the space of a week, as he continues to shine with his box-to-box style in the middle of the park.

Yep, WInks vs Gent for me in a middle 2,he has a greater range of passing, might be needed for that game.

disagree that experience is needed. Poch gave it to Winks vs West Ham with little experience. Bigger than Gent in Europa.

winks on Thursday , Moussa against stoke

Dembele loves to dribbling and get forward himself, winks plays in the attacking players. I say start winks vs Gent…

Winks needs to start on Thursday.

Spurs’ number 29 has been in fine form for the north London outfit since breaking into Pochettino’s first-team plans this season.

Showing a maturity, creativity and determination in midfield, Winks was handed a new contract last week which will keep him at his boyhood club until 2022.

In other Tottenham news, fans have also called on Pochettino to sign this European goal machine.