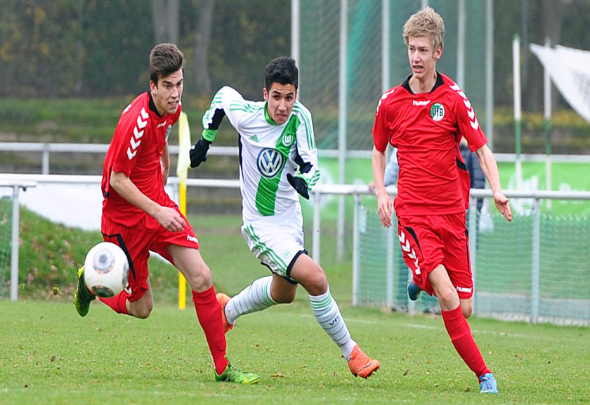 Tottenham have lost out on Wolfsburg attacking midfielder Murat Saglam to West Ham, according to a report.

The Sun have claimed that the Hammers have backed Slaven Bilic in obtaining the 18-year-old, who was also attracting Spurs.

The young starlet is out of contract in the summer and it is reported that West Ham have moved quickly to tie him up on a five-year deal.

It is stated that although he has not made his senior debut for the Bundesliga side’s first team, he has impressed with his performances for Turkey’s Under-19s team.

Saglam has represented Turkey at Under-18 and 19 level five times.

He has also played in the German youth division 13 times this campaign, scoring 3 goals and providing five.

The teenage ace is known for his versatility and as well as his natural attacking midfield position, he can also play as a striker, right-winger and a right-wing-back.

Saglam would have suited Tottenham’s methods of signing young prospects from around Europe.

Manager Mauricio Pochettino has a history of investing his time and effort into young players from his time at both Southampton and Spurs.

However, the Hammers also have a strong history regarding youth players and Bilic brought in young stars Domingos Quina and Toni Martinez in the summer.

Saglam has the potential to be a player who Tottenham may regret not signing in the future. The youngster clearly has some talent at the early stages of his career to have earned interest from two Premier League clubs. The fact that his contract expires in the summer also makes the purchase of little risk with no loss made on the young Turk. However, Spurs are blessed with young attacking midfielders currently in Christian Eriksen and Dele Alli, who have far more years left in them yet. Therefore, it may have been wiser for Saglam to get a move to West Ham, where it currently looks more likely that he will get more match time.

In other Tottenham transfer news, Spurs are in a three-way battle to sign this Championship star.