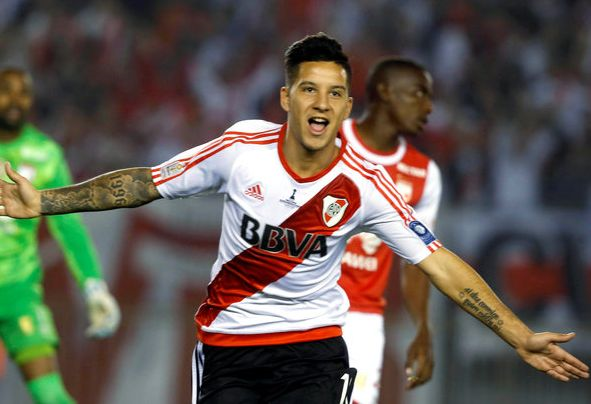 Tottenham are prepared to begin negotiations with River Plate over the transfer of Sebastian Driuss, according to a report.

The Independent claim Spurs manager Mauricio Pochettino has added Driussi to his January wishlist, and would need to cough up at least £10 million for his signature.

The 20-year-old striker has been in blistering form for the 36-time Argentinian champions this season, having scored 10 goals from just 14 games.

Pochettino believes himself to be in a good position to land Driussi, given his Argentinian roots and contacts in his homeland.

Driussi is rated very highly on home soil, and is considered one of South America’s most talented young footballers. He has drawn interest from Italian giants Juventus in the past.

However, River Plate boss Marcelo Gallardo has no intention of selling the Argentina youth international this month, and has requested that the club offer him an extended deal to ward off interest from Tottenham.

But club president Rodolfo D’Onofrio and technical director Enzo Francescoli appear a little more willing to part ways with the high-flying striker, provided they are offered the right price.

The pair would also request that in any potential deal, Driussi is to return to River Plate on loan, and for a sell-on clause to be written into the deal.

Financial mismanagement and ongoing disputes with the league and national football association has made it difficult for many Argentinian clubs to keep hold of their players – and Tottenham are likely to use this to their advantage.

River Plate have a good history of producing quality home-grown talent, having nursed the likes of Hernan Crespo and Ariel Ortega at the start of their careers. Both went on to have careers at some of Europe’s most popular clubs.

Tottenham already have a squad blessed with some of England’s brightest young talents, and the acquisition of Driussi would match Pochettino’s ambition of building a young squad. The striker has been setting his homeland alight in the first-half of the season, and has caught the eye of Pochettino as a potential Premier League star. Spurs are in dire need of another striker following the ongoing failures of summer signing Vincent Janssen, and Driussi could be an option. If Pochettino is reluctant to spend £30-£40 million or more on a proven prolific goalscorer then Driussi could be the next best thing. His links to Argentina means he can ensure he knows exactly what he is getting before striking a deal, and that could reduce the risk of him being yet another White Hart Lane flop.

We’ve launched an << EXCLUSIVE TRANSFER WINDOW NEWS FEED>>. ‘Like Us’ on Facebook by clicking here if you want 24/7 updates on all (insert name of club) transfer news