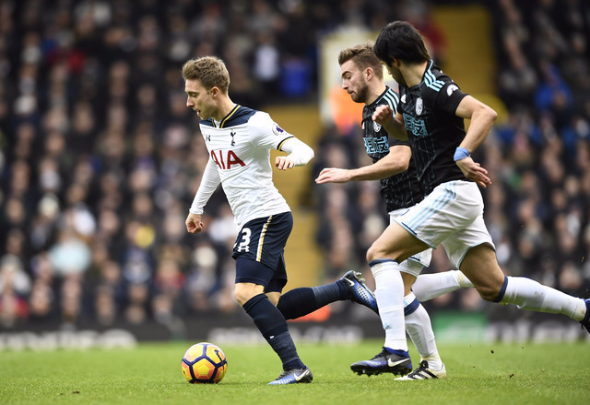 Football Insider rates the Tottenham players during their 2-1 win over Southampton in the Premier League on Sunday.

Hugo Lloris 6 – Only had to make routine saves. Commanding in his area and positioning spot on throughout.

Jan Vertonghen 7 – Shane Long was always looking to cause trouble, but Vertonghen remained composed and dealt with the threat.

Toby Alderweireld 6 – His failed clearance allowed Ward-Prowse to score for Southampton. A rare mistake, but a costly one. Had a bullet header superbly denied by Forster.

Ben Davies 6 – Lucky not to have conceded a penalty for a foul on Tadic. Still not quite at Danny Rose’s level.

Kyle Walker 7 – An intriguing battle with Nathan Redmond, but it was the defender that came out on top.

Mousa Dembele 7 – Authoritative alongside Wanyama. Set about his work calmly and quietly.

Christian Eriksen 8 – The 25-year-old repeatedly split the Southampton defence with his passing, and made everything look so easy. Opened the scoring with a superb strike.

Dele Alli 8 – Coolly taken penalty for yet another goal. Fantastic yet again, combining well with the influential Eriksen.

Son Heung-Min 6 – Few clear cut chances, but was lively in the final third. Sacrificed late on to preserve the lead.

In other Tottenham news, Eric Dier has aimed a cheeky dig at his Spurs team-mate about winning trophies.