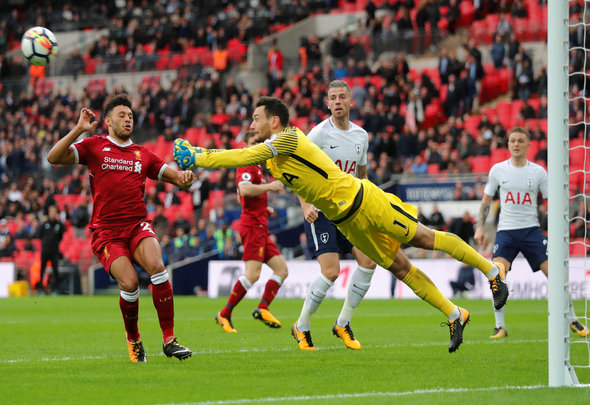 Tottenham fans will be delighted after watching their side sweep aside Liverpool at Wembley in their 4-1 win on Sunday.

Goals from Harry Kane, who netted a double, Heung-min Son and Dele Alli sank Jurgen Klopp’s side as Spurs made the most of some diabolical defending to boost both their points and goal difference, with Mo Salah’s goal the only blot on an otherwise perfect copybook.

Both sides came into the match off the back of impressive Champions League results, Spurs drawing 1-1 away at Real Madrid while Liverpool humiliated Maribor 7-0 in Slovenia, but it was the home side who came out on top in their league clash.

While Mauricio Pochettino’s side stay third in the Premier League table, they have moved level on points with Manchester United, after the Red Devils’ shock defeat to Huddersfield on Saturday, and sit five point off table toppers Manchester City.

So how did the Tottenham players get on against the Reds?

Here, Football Insider has ranked each of the club’s stars, including one man who was one thing away from securing a perfect 10/10:

Hugo Lloris – 9 – A stunning performance from the French shot stopper, who would have got a 10/10 had it not been for his error in Mohamed Salah’s goal. A key man at the back.

Toby Alderweireld – 7 – Playing on the right of the back three, Liverpool’s attack rarely threatened him. Confident, composed and a dominating presence.

Davinson Sanchez – 7 – Like his defensive partners, looks accustomed to playing in a back three. Used his pace and power well to keep the Reds at bay.

Jan Vertonghen – 7 – Asides being caught out for the Liverpool goal he barely put a foot wrong all afternoon, although he looked worried with pace running towards him.

Kieran Trippier – 8 – Set up Harry Kane’s first goal with a somewhat hopeful ball over the top, was energetic when attacking and limited the Liverpool wingers down his flank.

Serge Aurier – 6 – Not the most convincing of displays as the right back was shifted over to the left. Struggled to contain Mo Salah and was poorly positioned for Liverpool’s goal.

Harry Winks – 7 – Not the same eye-catching performances as in recent weeks but no less effective. Really composed on the ball and works just as hard off it.

Dele Alli – 7 – A performance reflecting the Alli of old (despite just being 21). Energetic and inventive, was deserving of his goal which settled Tottenham nerves.

Christian Eriksen – 8 – Anonymous against Real Madrid, he shone at Wembley for the second week in a row. Pretty much everything went through the Danish midfielder.

Heung-min Son – 8 – Has been lacking the finishing touch in recent weeks but not against Liverpool. A cracking strike thanks to Kane’s pass, he ran his socks off.

Harry Kane – 9 – Finally delivered proof that he can score at Wembley. A great finish for his first goal and a case of right place, right time for his second. Also set up Son’s strike with a cracking pass. A typical Harry Kane performance – crucial to this side.

Moussa Sissoko – 6 – Came on with 20 minutes to play but really did not offer too much as Liverpool saw much of the ball in the dying stages.

Eric Dier – 6 – Just 10 minutes given to the man dropped to the bench through reported illness. Did not give Liverpool much of a sniff despite their possession.

Fernando Llorente – N/A – Given less than five minutes after Harry Kane appeared to pull up with a muscle injury. A layoff for the England striker is the only way he will see any meaningful minutes in the league right now.

In other Tottenham news, Sky Sports have revealed a crucial update on reported transfer talks with a European giant.