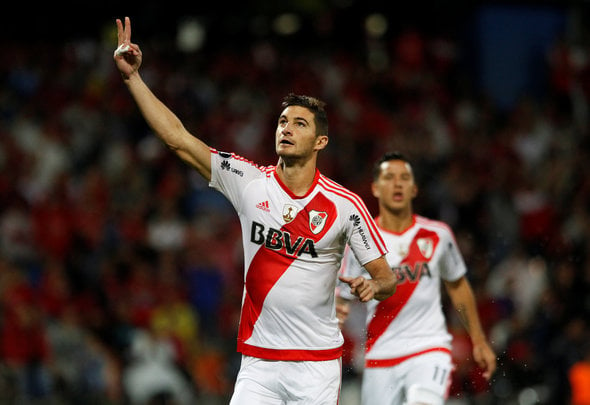 Tottenham are keeping tabs on River Plate striker Lucas Alario, according to a report.

Argentinean newspaper Ole claims on their website that the 24-year-old is attracting the attention of some of Europe’s elite.

It is understood that Lazio and Paris St. Germain are in the race with Spurs for the striker.

However it is also claimed that Premier League club West Brom have made contact with River Plate with a view to striking up a deal.

Ole reports that a Chinese club had offered the release clause in Alario’s contract, which is understood to be worth £15.5million.

However the two-times Argentina international snubbed the offer as he would rather stay at River Plate.

Alario, who’s contract is set to expire in 2019, has made 24 appearances in all competitions for River this season, scoring 11 goal and supplying three assists.

He signed for the Buenos Aires-based outfit in 2015 after a spell at Colon and was handed his international debut a year later in a World Cup qualifying clash with Uruguay.

The striker has experienced how it feels to play against some of the world’s biggest clubs when he featured in all 90 minutes of River’s 2015 FIFA Club World Cup final loss to Barcelona.

Spurs need to find a new striker in the summer but going in for a player like Alario could prove to be a massive risk. Vincent Janssen has been pretty poor when relied upon to take Harry Kane’s place in the lone striker role, so an improvement is definitely needed. The North London club do have a history of signing Argentinean players with Ricardo Villa and Ossie Ardiles being two of their legendary players. Erik Lamela is currently playing for Tottenham but West Brom also have Claudio Yacob in their ranks, so it’s unlikely that could prove to be a decisive factor in Alario’s decision.

In other Tottenham news, the club are keeping an eye on this Bundesliga speed machine.