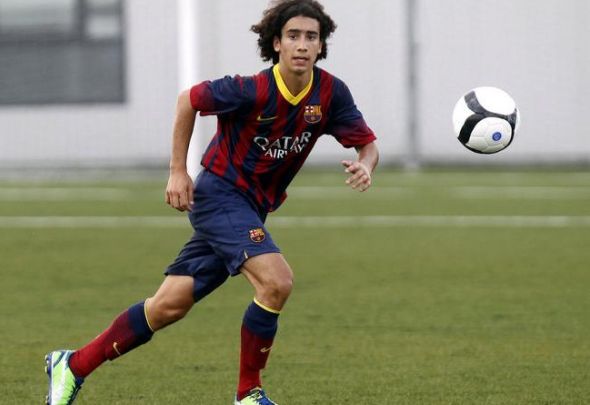 Tottenham are set to rival Premier League duo Everton and Chelsea for the signature of Barcelona’s youth player Marc Cucurella, according to a report.

Spanish outlet Sport claim the 18-year-old has caught the attention of the Premier League trio, as he’s out of contract next summer.

However, Barcelona are are keen to extend his contract and the report says that he is focused on staying as a Barcelona player despite the interest from other clubs.

Starring throughout La Masia’s glittering youth academy, left-back Cucurella is one of the hottest properties to come through the academy in recent years and is hoping to worm his way into Barca’s first-team plans in the near future.

However, with his contract set to come to an end in the summer, clubs are free to talk to him in January.

A former Spain Under-17 international, the youngster is known for his willingness to get forward on the left flank as well as his ability to find the back of the net from the left side of the pitch.

He’s scored three times in five games for the Spanish Under-17 side, and has also found the back of the net in the UEFA Youth Champions League.

The signing of Cucurella for Tottenham and indeed either Everton or Chelsea would be a huge coup, as he continues to star in Barcelona’s youth academy. The defender has shown a maturity at the back for Barca, but has the physique and aerial ability to succeed in England. Signing him now on the cheap would prove a risk for Pochettino’s north London giants, but it could turn out to be one of Tottenham’s best signings as Cucurella continues to set the bar as high as possible for himself. If he does move to England, the youngster will be hoping to emulate the likes of Cesc Fabregas and Hector Bellerin, who both made the move to England from the Nou Camp when young. However, as the report states, Barcelona want to keep hold of him and he wants to stay there, which means it’s unlikely that any of the three would be successful if they did launch a bid to lure him over to England next summer.

In other Tottenham transfer news, these Euro giants are monitoring a Spurs defender ahead of January.