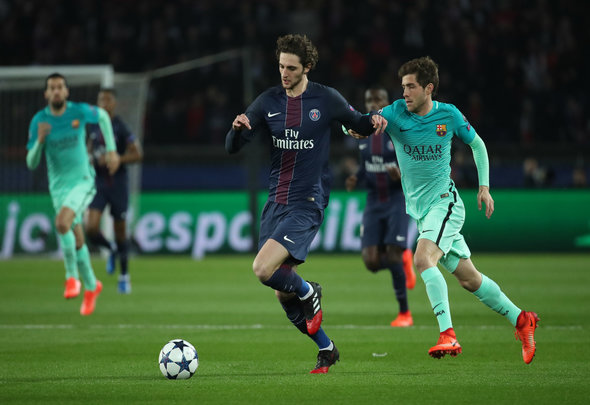 Tottenham are ready to reignite their bid to sign Adrien Rabiot from Paris Saint Germain, according to a report.

The Sun claim the London giants “could go back in” for the midfield kingpin, who has emerged as one of Europe’s outstanding young central midfielders.

It is said that Spurs will not be put off that their attempt to land Rabiot on a loan deal two years ago was blocked by the French champions.

Arsenal also made a move to sign Rabiot from PSG two years ago but were unable to push through a deal before the summer 2015 window shut.

The young midfielder, 21, has continued to develop and has emerged as a central figure under Unai Emery this season, delivering a sensational performance a fortnight ago as PSG thrashed Barcelona 4-0 in a Champions League last-16 first leg clash.

The one-time France international has made 26 appearances in all competitions this season, scoring two goals and supplying three assists from his deep midfield role.

Rabiot is out of contract at PSG in the summer of 2019.

Rabiot’s recent display in PSG’s demolition of Barcelona confirmed what the football fraternity have known for some time; here is a midfielder of exceptional potential. In the normal scheme of things, a PSG first teamer would be out of Spurs’ price range, but he is out of contract in the summer of 2019, which paves the way for many of his admirers to make a move. Excellent in possession and technically adept, Rabiot would offer a well-rounded skill set to a Spurs midfield which has struggled badly in Europe this season. The great thing is he is only going to improve as he becomes more experienced.