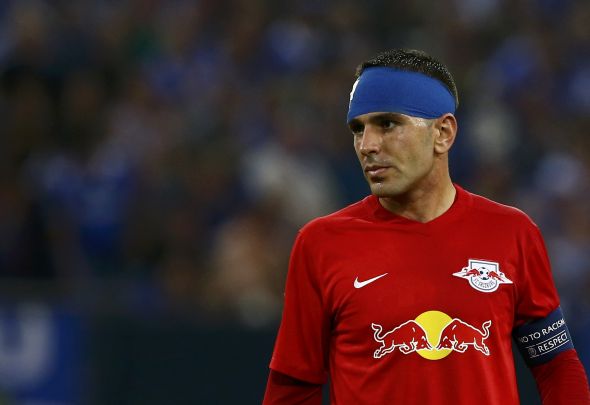 Gazzetta Dello Sport writer Giulianelli claims that the Austrian side have received three enquiries for the 31-year-old hotshot, ahead of the January transfer window.

Wearing the captain’s armband, Soriano has scored 10 goals in 21 league and cup encounters, including once in the Europa League against Bundesliga outfit Schalke this season.

The former Barcelona striker has a contract with Salzburg until the summer of 2018 and his side could look to cash in on the 31-year-old before his value drops or they risk losing him on a free in 18 months’ time.

West Ham are in desperate need for a striker after Diafra Sakho was ruled out for eight weeks with a back injury, which will also see him miss the Africa Cup of Nations.

With Simone Zaza, Jonathan Calleri and Andre Ayew all failing to find the back of the net since their summer moves to the London Stadium, a new striker is high on the agenda for manager Slaven Bilic.

There is no doubt that Soriano’s experience would add goals and an attacking threat to the West Ham side, as he continues to score at a frightening rate for his side. 170 goals in 200 games is an incredible record, although, it must be considered that the defences in the Austrian Bundesliga are very different from the Premier League’s back lines. Bilic has constantly looked to boost his side with acquisitions from foreign shores, but the likes of Zaza, Calleri, Gokhan Tore and Sofiane Feghouli have all flopped in east London. Before moving for Soriano, ex-Croatia manager Bilic should consider bringing in proven Premier League talent. However, if you’re looking for goals it’s hard not to have your head turned by Soriano’s stats.

In other West Ham transfer news, this £12million-rated Argentinian striker is also on Bilic’s radar after a prolific spell in Brazil.