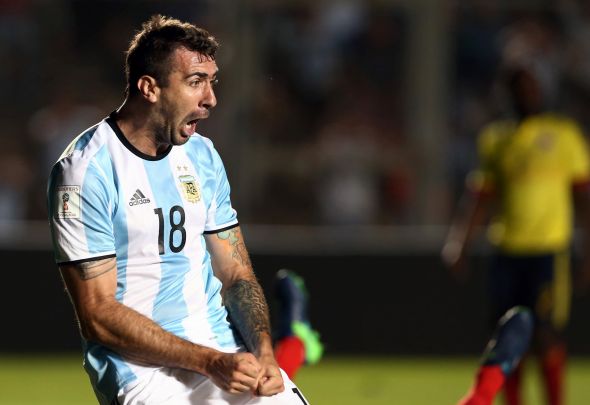 West Ham have approached striker Lucas Pratto over a potential January move to the Premier League, according to a report.

The Sun claim that the 28-year-old has been approached directly by the Hammers as they look to complete a £12million move for the highly-rated Argentina international.

Atletico Miniero forward Pratto is believed to have a fixed-sum clause in his contract that will allow him to move if the fee is met.

West Ham are desperate to add a new striker to their ranks, as summer signings Simone Zaza, Jonathan Calleri and Andre Ayew have failed to find the back of the net in a claret and blue shirt.

Target man Andy Carroll has only just returned from injury, while Diafra Sakho is currently in the physio room after picking up a hamstring injury that will keep him out until the new year.

Enner Valencia is on loan with Everton, while Championship outfit Leeds are reportedly in talks over a £2million move for Ashley Fletcher.

That means Slaven Bilic is likely to enter the market for a striker, and it looks like he has identified Pratto as one of his targets ahead of the January transfer window.

After prolific spells across South America, Pratto has scored 23 goals in 61 games for current side Mineiro adding a further seven goals in assists.

Bilic’s preference to go abroad for recruits has severely backfired so far this season, and the former Croatia and Besiktas manager would be better off signing a striker with proven ability in the Premier League. The likes of Aaron Cresswell, Mark Noble and Andy Carroll have all impressed during their time in the Hammers side this season, and an English alternative to Pratto would surely be a better option. Pratto has experienced time in Europe before with Genoa, which ended in failure after just three goals in 17 league and cup appearances. It must be said that Pratto has been in excellent form recently however, belatedly making it into the national side, and could be a different player after winning his first Argentina cap in September.

In other West Ham transfer news, the Hammers are at the front of the queue for this Premier League ace after he opted to reject a contract offer.