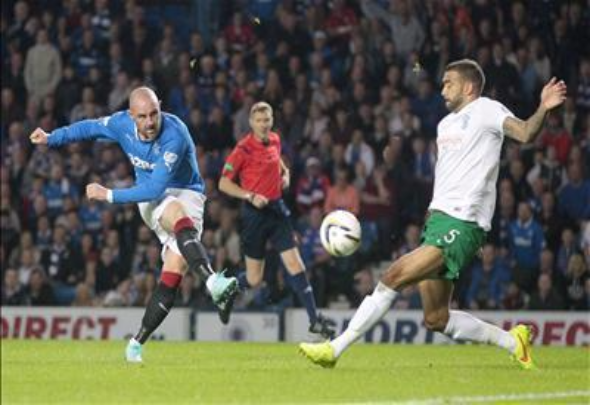 Former Rangers striker Kris Boyd has torn apart his old club for reportedly allowing Bruno Alves to fly to Spain for treatment of his calf injury.

The 35-year-old limped off the pitch during the Light Blues’ midweek Scottish League Cup win at Partick Thistle and according to Boyd has travelled away from Ibrox for his recovery.

The defender’s absence means that he will miss out on watching his club’s first Old Firm clash of the season on Saturday afternoon, and Boyd believes it’s a disgrace that his trip to Madrid was allowed.

“The fact he’s in Madrid is an utter shambles,” the Kilmarnock forward explained in his column for the Scottish Sun.

“There’s no other way to describe this situation, which, quite frankly, sums up everything that seems to happen at my old club these days.

“Whoever sanctioned his trip to Spain should hang their heads in shame. It’s an absolute disgrace.

“Let me tell you here and now, the Portugal international doesn’t need to be anywhere other than Murray Park for treatment to his injury.

“I’ve worked with the Rangers medical staff and they’re the best in the business.”

Kris Boyd’s comments follow a recent report by STV which recently revealed that the Rangers summer signing could be facing weeks on the sidelines with injury.

The loss of Alves for the clash against Celtic will be a huge blow for Rangers, given his experience and it will no doubt be an even bigger blow if he isn’t on the sidelines to support his club.

On Tuesday, Under-20 star Ross McCrorie stepped in for the Portuguese centre-back at Firhill and looks set to be called upon again on Saturday for the first all-Glasgow derby of 2017/18.

In other Rangers news, Scott Brown has made a big claim about the Gers’ tactics ahead of the Old Firm derby.