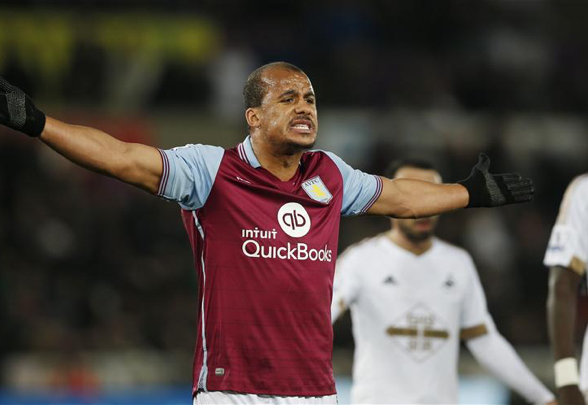 Aston Villa fans have had an upbeat reaction to the sensational news that Gabby Agbonlahor is making his Villa return from the bench on Sunday against rivals Birmingham.

The boyhood Villa fan has not featured for the Midlands giants this season, after former manager Roberto Di Matteo opted to leave him out of his first-team plans.

But, since the appointment of Bruce, the club’s longest-serving player has been offered a clean slate and ordered to undertake a six-week fitness programme.

Now, he’s been named in the matchday squad to take on Birmingham in the Championship and fans took to Twitter to call for a last-minute winner from the 30-year-old striker.

However, support for the forward was not unanimous with some fans posting that he doesn’t deserve another chance for the club.

Derby day. Gabby to come on and score the winner?! 💪 #avfc

Have to be honest….LOVE that Gabby is on the bench for this one! Derby day!! #AVFC

I can, anyone else is surely better than Gabby. He's had far too many chances. He doesn't deserve to play for villa full stop.

It’s the first time the two sides have met in England’s second tier in 29 years, when Villa won 2-1 away.

The two rivals did meet in the League Cup last year and Villa also beat their rivals then, with a goal from Rudy Gestede the difference between the two sides.

Former Birmingham manager Steve Bruce hasn’t lost a game since taking over at Villa, and he takes his side into the derby following back-to-back wins.

In other Aston Villa team news, former midfielder Lee Hendrie had this message for the team ahead of the clash with Birmingham.