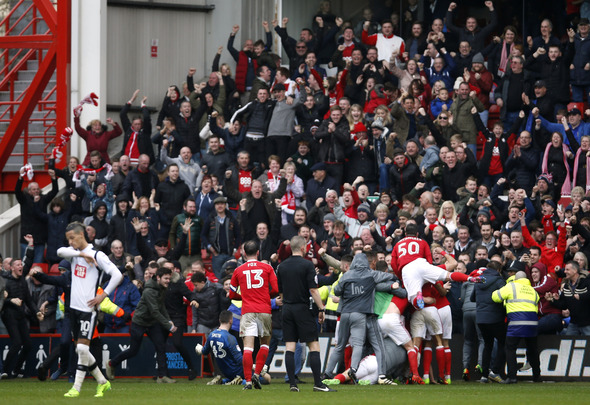 It’s been a big week at Nottingham Forest.

Mark Warburton was announced as the new City Ground boss on Tuesday and he was thrown straight into the deep end when he took charge of his first game in a fiery all-East Midlands clash against Derby.

The Rams were also under the new leadership of Gary Rowett and both sides put in a valiant effort to create some great entertainment as they shared the spoils in a 2-2 draw.

However despite some last minute heroics to secure a point, Forest are still in deep trouble at the wrong end of the Championship table and are hovering just above the drop zone.

Warburton arrives on the banks of the River Trent

The 54-year-old was announced on Tuesday as the new Forest boss on a two-and-a-half year deal.

He replaced Gary Brazil in charge at the City Ground after the interim boss managed to win just one of his previous seven league games at the helm.

David Weir joined Warburton as assistant manager and they teamed up alongside director of football Frank McParland, who all worked together at Rangers.

The Forest faithful were full of optimism with their new man in charge.

Warburton won the Scottish Championship and Scottish Challenge Cup with Rangers last season and also had great success in England when he helped Brentford earn promotion to the second-tier when they finished second in League One in 2013/14.

Daniel Pinillos sent the Forest crowd into ecstasy when he scored a 94th minute equaliser to earn a point against local rivals Derby.

Zach Clough gave Warburton the perfect start to life with the club in the fifth minute when he put the Reds ahead.

However second half strikes from Matej Vydra and David Nugent before Pinillos’ last gasp header provided some great entertainment in Robin Hood country.

In other Nottingham Forest news, Warburton reportedly turned down a role at this big Premier League club to move to the City Ground.