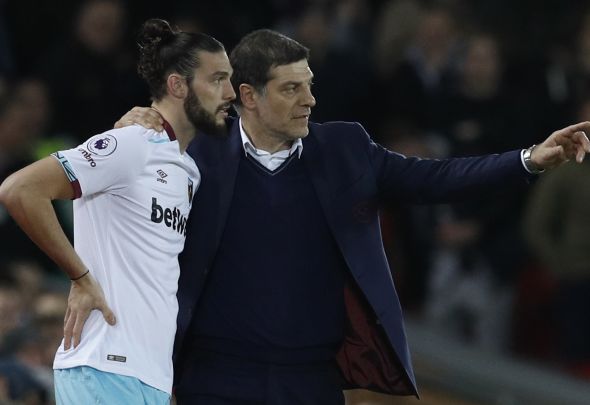 Andy Carroll starts for only the third Premier League game this season as he attempts to fire West Ham into mid-table safety over the festive season.

He retains his place at the spearhead of the Hammers attack after he came through 82 minutes against Burnley on Wednesday.

He’s joined by Manual Lanzini and Dimitri Payet in attack as Slaven Bilic names an unchanged side and looks for back-to-back Premier League wins for the second time this season.

The team news was announced on the official West Ham twitter account ahead of the 3pm kick-off.

It’s been a tough start to the season for West Ham in their new stadium. After being dumped out of the Europa League in qualifying by Astra Giurgiu, they’ve struggled to keep up with their league form from last season.

After 16 games the Hammers have only registered four wins and are in 15th place just four points above the relegation zone.

The main issue has been goals, with Payet under-performing and Carroll only just back from injury.

West Ham’s opponents today at the London Stadium are Hull, who are also struggling. Second from bottom with just three wins from 16 games and 12 points, Hull is the sort of team West Ham have to beat at home if they want to avoid a relegation struggle.

In other West Ham team news, striker Andy Carroll has said that West Ham are too good to get sucked into a relegation battle.