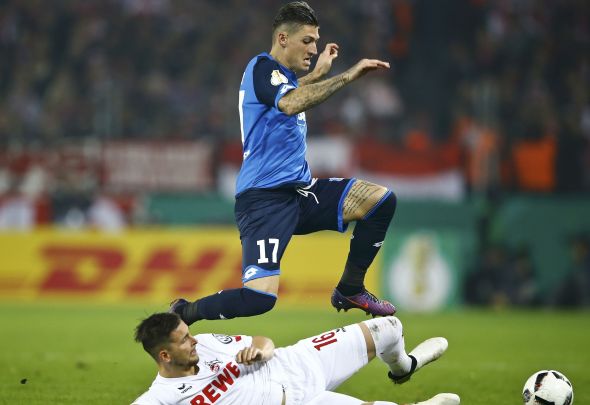 West Ham are lining up a summer move for Hoffenheim midfielder Steven Zuber but face competition from Italy and Spain, according to a report.

Spanish publication Estadio Deportivo claim that the Hammers are keeping tabs on the Switzerland international, with Bundesliga outfit Hoffenheim rating him at £8.6million.

However, the report also claims that Italian champions Juventus are keen, while Valencia and Sevilla want to bring him to La Liga.

The Germans want to retain the 25-year-old with a potential campaign in the Champions League on the horizon as they remain in a lofty fourth place, one point behind Borussia Dortmund.

Zuber has caught the eye this season after having a hand in five goals during his 15 Bundesliga appearances, scoring three himself and adding another two in assists.

The Hammers could look to sign Zuber to bolster their ranks out wide, after Gokhan Tore returned to Besiktas from his season-long loan due to injury.

Hoffenheim’s number 17 joined Julian Nagelsmann’s side back in the summer of 2014 from Russian giants CSKA Moscow, and has a contract with his current side for another three years.

The Hammers are in desperate need of reinforcements over the summer. 2016-17 signings Sofiane Feghouli and Robert Snodgrass have failed to hit the heights expected of them at the London Stadium, and a replacement should be brought in by Slaven Bilic with the summer transfer window looming. However, Bilic must consider the fact that many of his signings from oversees clubs this season have struggled to adapt to the rigours of England’s top flight. The likes of Jonathan Calleri, Arthur Masuaku and Havard Nordtveit have all failed to provide an impact in claret and blue. The Croatian manager should scour the market for options on these shores, before moving for Zuber.

In other West Ham transfer news, fans have urged the club to sign this experienced forward after he scored on the international stage.