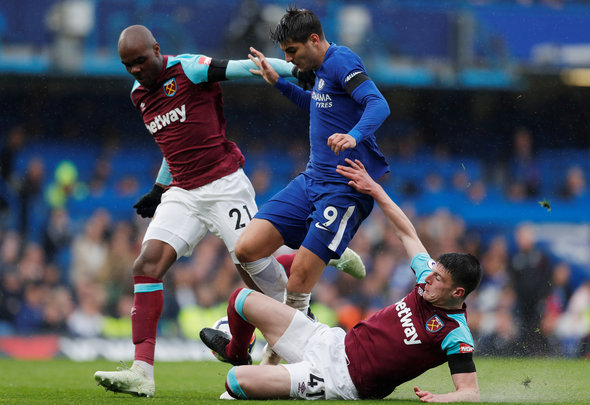 West Ham and Chelsea shared the spoils on Sunday afternoon at Stamford Bridge in the Premier League with a 1-1 draw.

Cesar Azpilicueta had given the Blues a first-half lead when he capitalised on a knockdown from Alvaro Morata in the box to stab the ball home.

But the Hammers never gave up home and in the 73rd minute of play, Javier Hernandez handed the visitors a point – and his ninth against Chelsea in his career.

It was the display of Declan Rice, however, that excited the travelling supporters.

The 19-year-old only emerged from the youth set-up this season and hasn’t looked out of place amongst the senior stars.

And the match against the champions was just his ninth career start for the Hammers since coming into the side.

Clearly, manager David Moyes wasn’t worried about selecting the Ireland international for the fixture despite the youngster’s inexperience.

It was an exceptional display, one of pace, grit and determination and it’s clear to see why the club are reportedly keen to extend his contract to remain in East London for the long-term.

There were even pockets of Irons fans who were calling for the youngster to be the club’s future captain after the draw.

Here is a selection of Twitter reactions from the Hammers faithful who absolutely loved their defender’s display:

Like a duck to water for you pal. Outstanding AGAIN!

Declan made a couple of game changing interceptions and clearances. And his positioning was outstanding.

What a mistake they made lad! You’ve been absolutely brilliant this year and continue on getting better! It’s an absolute treat to have you with us. ⚒❤️

Played brilliantly Deccers! Bright future ahead of you! Hopefully at West Ham and as the next captain!

Chelsea's biggest mistake releasing Dec Rice! So glad became Hammer don't look back hope you break many record with us⚒

Another fantastic performance Declan! Just hope we can keep hold of you! Future Captain! ⚒

In other West Ham news, Everton in hot pursuit of left footer who wants Merseyside return, £25m bid on table.