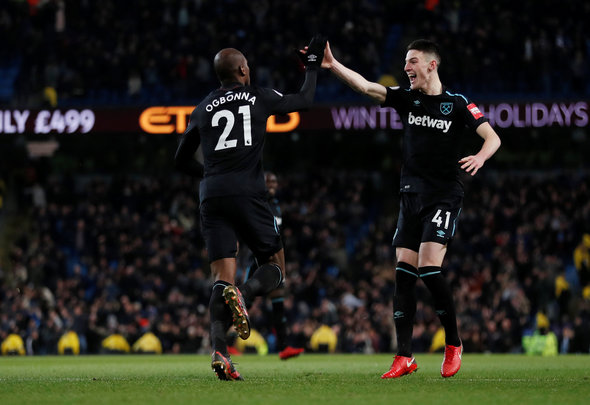 West Ham fans have heaped praise on Declan Rice after he was called upon to play at centre-back against Manchester City on Sunday.

Rice, 18, completed 90 minutes as the Hammers succumbed to a 2-1 defeat at the Etihad, but the performance will no doubt give everyone a lot of hope going forward as the Citizens had to work really hard to earn a win.

Angelo Ogbonna opened the scoring for the Hammers just before the half-time break and after the action restarted they were face with a back-to-the-wall job against the Premier League title favourites.

According to West Ham fans on Twitter, Rice was brilliant in fulfilling his role at centre-back alongside Ogbonna, even though he is more often used as a defensive midfielder.

Dumbfounded!!! Rice has been quality and we've actually played some football, City have only had long range shots and we've had the better chances. Am i looking forward to the 2nd half? No cause #city can only get better #cityvwhu #COYI

What is going on?!
I didn't agree and still don't really with the park the bus tactics but so far everyone is doing their job well and it's working!
City not been at their best so 2nd half could be different though!
Rice & Obiang have been great imo. #COYI

Adrian & Rice are taking there chance well too! Definite starters from now on for me! #COYI

Rice excellent against one of the top 5 strikers in the world. We've got a special talent there. #COYI

I’ll say it, Declan Rice should be a regular first team starter in our current squad #COYI ⚒

Our boy Declan Rice shows more passion in his play than the other 10 on the pitch… Watch and learn! #COYI #WHUFC

@_DeclanRice and the defence have been great also. For a guy on his 3rd start and 7th total appearance to play 75 mins and not put a foot wrong against KDB, Aguero, Sane et al is fantastic. #MCIWHU

Rice has made 10 appearances across all competitions for West Ham this season and was only featuring in his 11th ever Premier League game against Man City.

However he did not look out of place against the likes of Kevin De Bruyne, Sergio Aguero and co in what was a narrow defeat for Moyes’ side.

In other West Ham news, Gary Neville took a swipe at the Hammers ahead of their clash with Man City.