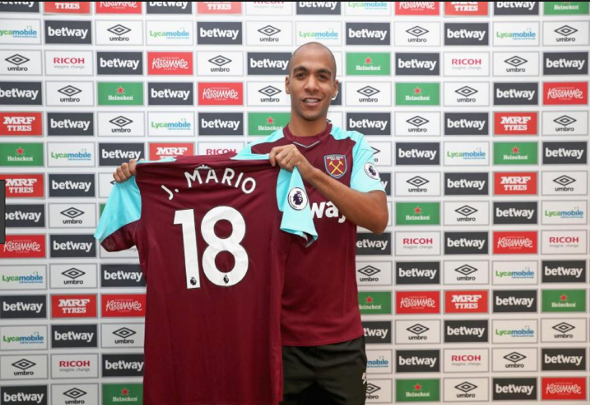 Joao Mario made his West Ham debut today in the Premier League match against Crystal Palace and fans are very happy with what they’ve seen so far.
David Moyes put him straight into the first team after his move from Inter Milan after injuries to Marko Arnautovic and Manuel Lanzini.
And Mario looked immediately at home in the pressure cauldron of the Premier League, impressing West Ham fans from the off.
Their side went behind to a Christian Benteke goal in the 24th minute but pulled themselves level before the break with a Mark Noble penalty.
And Mario was at the heart of the move that led to the spot kick, with Javier Hernandez getting upended.
The game ended 1-1 to leave West Ham in 10th position in the Premier League.
Here is a selection of the best reactions to the Portuguese midfielder from his display at the London Stadium on Tuesday night.
https://twitter.com/DJTiale/status/958442982503518208

First 45 mins in the premier league, and so far I’m pretty impressed by Joao Mario. So far…. #WHUFC #COYI #WHUCRY

Joao Mario & Lanzini behind Arnautovic is a dream 😍

Joao mario player very well that first half done fantastic for the penalty.. he will be a real problem once he has lanzini and arnie back and he’s fully fit

Joao Mario will be so good when Arnie is back. Them two with Lanzini will be lethal. Impressed with his performance so far, just needs someone to link up with.

Joao mario 👀 early days but looks a bit of a baller 😎

In other West Ham transfer news, the club are set to offload a powerhouse to his former club after a bid was tabled for his signing.