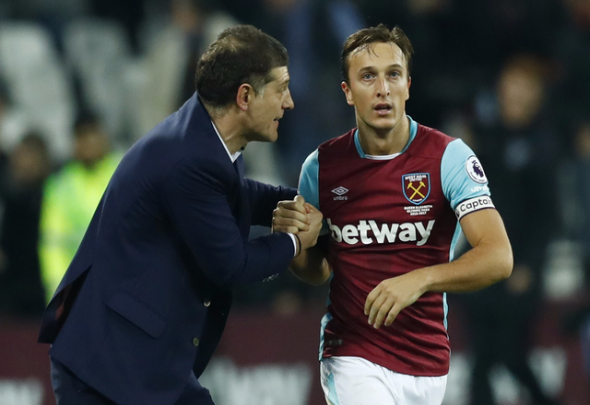 Mark Noble scored a second-half penalty as West Ham beat Hull 1-0 at the London Stadium on Saturday afternoon – and fans on Twitter provided mixed views on his performance.

Mike Phelan’s side dominated the game as they hit the woodwork on three occasions, but the home side picked up the valuable three points.

Midfielder Noble played the full match and stepped up to score his second goal of the week when Michail Antonio was controversially brought down 14 minutes from time.

As the away side were dominating proceedings, one West Ham fan felt that their captain looked lost in the middle of the park.

While another supporter stated that Noble was a passenger in midfield as he has allowed the game to open up after the break.

Additionally, he received more criticism when one fan said that Noble slows the pace of the game down.

However, when he scored the winning penalty, the Hammers faithful were clearly delighted with his contribution to the game.

Noble slows everytjing down to walking pace. Hook him #whufc

Noble might not be the quickest or the most talented but he has got us 6 points in a week & I think he is bloody great!! 😀 #COYI #WestHam

Mark Noble what a man #COYI ⚒⚒

Noble has played 16 Premier League games for Slaven Bilic’s side this season, scoring two goals, but he is yet to provide an assist in the league.

That win moves the east London club to 13th in the league table on 19 points from 17 games, five clear of the bottom three.

In other West Ham news, supporters on Twitter were delighted with Cheikhou Kouyate’s performance against Hull.