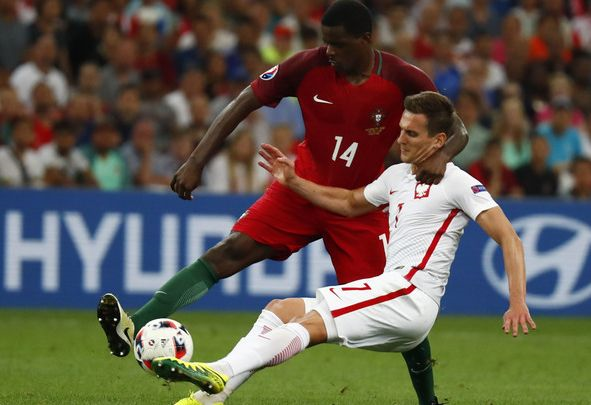 West Ham have tabled a bid worth £27million for Sporting CP midfielder William Carvalho, according to a report.

The Daily Mail claims that the 25-year-old Portugal international is keen on a switch to London, but Sporting are said to be hard to negotiate with and will be looking to settle for a fee closer to his £39million release clause.

However it is understood that Sporting are “open to compromise” as talks progress with West Ham, who will be breaking their record transfer for the second time this summer if they manage to complete a successful pursuit of the European midfielder.

Marko Arnautovic’s potential £25million move from Stoke in July is the Hammers’ current record spend on a player.

The report adds that Carvalho would be looking for a deal worth £100,000-a-week should he opt to switch Portugal for east London.

West Ham are not the only Premier League team said to be in pursuit of Carvalho, with the Daily Mail reporting earlier this week that Arsenal, Manchester City and West Brom are also linked with the midfielder while the Irons were still plotting their first advance.

The 37-times Portugal international, who lifted the Euro 2016 title last year, has been in impressive form for Sporting over the years and last term he made 43 appearances across all competitions, scoring two goals in the process.

West Ham look like they are serious about trying to sign Carvalho and ending the pursuit of their Premier League rivals in the process. The fact that Man City and Arsenal are both keen on the 25-year-old shows the quality that he has and Slaven Bilic will be snapping up a player who could easily become their best player next season. With the Hammers’ current buys they are expected to finish in the top half, but a successful swoop for Carvalho could see them go to the next level and challenge the likes of Everton for a spot in Europe. It must be exciting for the Irons supporters at the moment, Javier Hernandez, Joe Hart and Carvalho are big names and should do wonders at the London Stadium.

In other West Ham news, the Hammers are also eyeing up this midfielder from one of their London rivals.