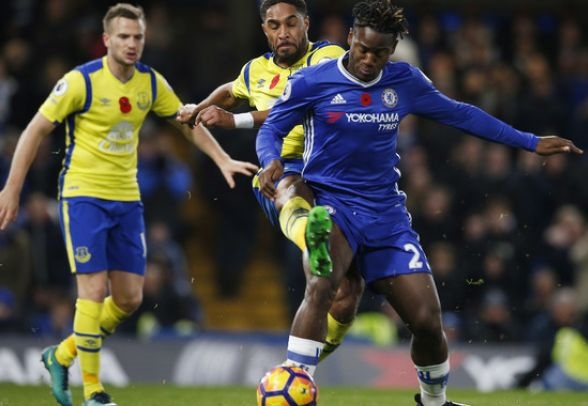 West Ham are eyeing a loan move for Chelsea striker Michy Batshuayi in January, according to a report.

The Belgian striker joined Chelsea for £33million in the summer, but has rarely featured under Antonio Conte, and has yet to start a Premier League game.

The Hammers find themselves in 15th place with a major job to do to avoid slipping into a relegation battle and, according to the Sun, Slaven Bilic is looking to the 23-year-old to fire them out of trouble.

Bilic wanted to bring Batshuayi to the club in the summer, but narrowly missed out to Conte’s Chelsea. Now, he is set to renew his interest.

Batshuayi is a proven goalscorer who came onto Chelsea’s radar after spells with Standard Liege (44 goals in 120 games) and Marseilles (33 goals in 78 games). He’s also scored three goals for Belgium in nine appearances, including one in the last 16 of Euro 2016 against Hungary.

However, Batshuayi has made just nine league appearances this season – all as a substitute – completing just 77 minutes of football and scoring one goal. He has had more luck in cup competitions and for Chelsea’s reserves, where he has netted four goals in four appearances.

He has struggled to break into the Blues first-team because of the superb form of Diego Costa, who has scored 12 goals in 18 appearances in all competitions since the start of the campaign.

The Sun claim that Batshuayi is growing frustrated at his lack of appearances, and with West Ham  looking to add more firepower to their squad ahead of the second-half of the campaign, he is their number one target.

Premier goalscoring duo Andy Carroll and Diafra Sakho have missed the majority of the campaign with injury, while summer loan signings Jonathan Calleri and Simone Zaza have both flopped.

Zaza is expected to return to Juventus next month, as West Ham do not want to trigger a permanent deal in his loan contract agreement.

The club would be hoping that a loan move for Batshuayi would be much more successful.

A potential deal between Chelsea and West Ham actually looks fairly promising. Batshuayi proved himself at Standard Liege (44 goals in 120 games) and Marseille (33 goals in 78 games) before moving to Stamford Bridge and Chelsea fought off quite a bit of competition for his signature. However, he simply hasn’t had enough action because of Costa being in such great form. The Spaniard is leading them to the Premier League title, and Batshuayi can’t even get a foot in the door. Antonio Conte will want to have backup options available should Costa pick up an injury or a suspension, but it might be in the club’s best interests to allow Batshuayi to get some game-time under his belt. He could do with Premier League experience and he would be considered a first-team regular at West Ham. The striker is still only 23-years-old, and there’s a lot still to learn and prove, and warming the bench at Stamford Bridge is simply not going to achieve that.

In other West Ham news, the Hammers have beaten Manchester United to the signature of this midfielder.