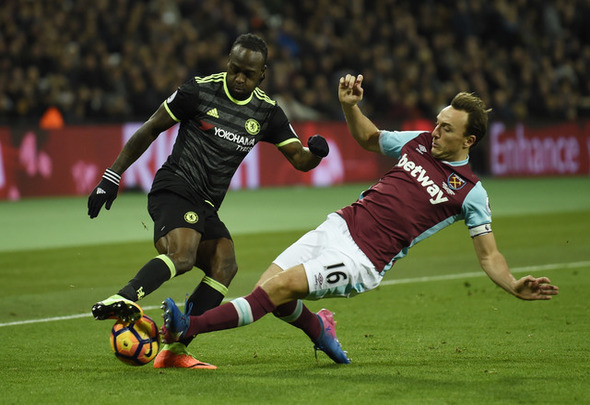 West Ham performed excellently at the London Stadium on Friday night to earn themselves a surprise 1-0 win at home to Tottenham.

The result mathematically secured the Hammers’ Premier League safety while at the same time rocketed them up the table into ninth, ahead of the weekend’s fixtures.

It also put a serious dent in the title hopes of their London rivals, as Spurs sit four points behind league leaders Chelsea having played an extra game.

It was the Hammers’ third straight clean sheet, and fans took to Twitter to pay credit to goalkeeper Adrian for his part in their impressive run.

However, not everyone in claret and blue was firing on all cylinders on Friday – here Football Insider analyses the three worst players.

Noble was restored to the starting XI after being named on the bench against Stoke, but the 29-year-old appeared off the pace at times.

The Hammers icon earned himself a yellow card for a really nasty tackle on Eric Dier, and was walking a tightrope for the rest of the match.

He did a good job of hassling the Tottenham midfielders, but his passing and shooting was off target, and he gave up possession more often than he or his manager would have liked.

Perhaps the Ghana international was overshadowed by his attacking partners, Jonathan Calleri and Manuel Lanzini, but the 27-year-old seemed almost invisible for most of the game.

He rarely threatened and played a minimal role in West Ham’s attacks, often finding himself in the wrong place when the ball was delivered from the flanks.

The one time he did manage to receive the ball in the box, he set up Manuel Lanzini for their goal, albeit with a mis-hit strike.

If West Ham had not won this match, questions would have been asked over his contribution.

Finding a third candidate for this list was a difficult ask, with West Ham having performed so brilliantly against their London counterparts.

However, one man who will be relieved that Spurs failed to live up to their full potential will be midfielder Kouyate.

It was an all-action performance from the Senegal international, who showed terrific energy in the centre of the park to lead counter attacks and pressure the Tottenham players when defending.

However, more than once Kouyate conceded a needless free-kick, and he will be counting his blessings that Christian Eriksen, usually so dangerous from set-plays, was unable to take advantage.

With his mistakes going unpunished, he has managed to escape much criticism, but the result could have been different on another day.

In other West Ham news, fans were left fuming on Twitter after Slaven Bilic started this 23-year-old against Spurs.