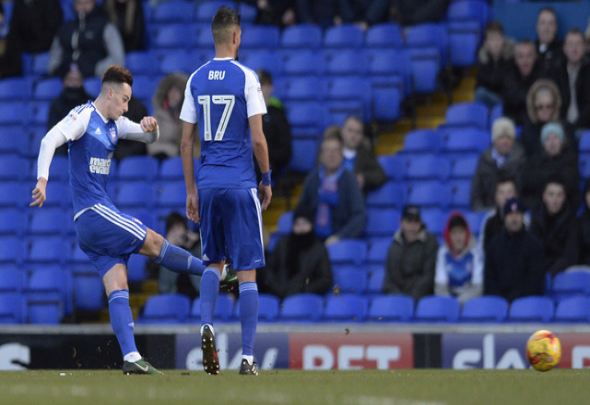 Leeds should consider making Tom Lawrence a priority signing in the summer and were reportedly interested in his services during January.

The 23-year-old has been in great form for Championship rivals Ipswich this campaign during his season-long loan from Leicester.

Leeds identified Lawrence as a potential January target as manager Garry Monk tried to bolster his attacking options, something that has turned out costly as they missed out on the play-offs.

It was understood that Leicester would consider recalling the attacker in order to grant him another move, but he has kicked on and been in great form at Portman Road.

The Whites should now consider a summer for the Welshman when he returns to the Foxes as he could be the missing ingredient next season.

Lawrence has been one of Ipswich’s top players this campaign and proved that he can be effective in the Championship.

He has made 38 appearances across all competitions, scoring 11 goals and supplying 11 assists in return.

The Wales international has quite often operated from a wide area, but can also be used through the middle.

Leeds appear to have just missed out on the Championship play-offs this season as they would need a highly unlikely 14-goal swing on the final day.

Garry Monk’s side have surprised many by their strength this campaign, but have fallen away in the latter stages.

It is believed by most that their lack of firepower has been the crucial factor as 29-goal striker Chris Wood has been the main source of goal, with the next best scorer chipping in with six.

Leeds need some extra quality in the wide areas and a greater goal threat next season, meaning Lawrence would be the ideal signing.

It is not yet known whether Leicester will be willing to give the attacker a crack in the top-flight next season, but Leeds should make a move early in the window to try secure his signature.

In other Leeds transfer news, a BBC pundit believes the club should have signed Sergi Canos in January.