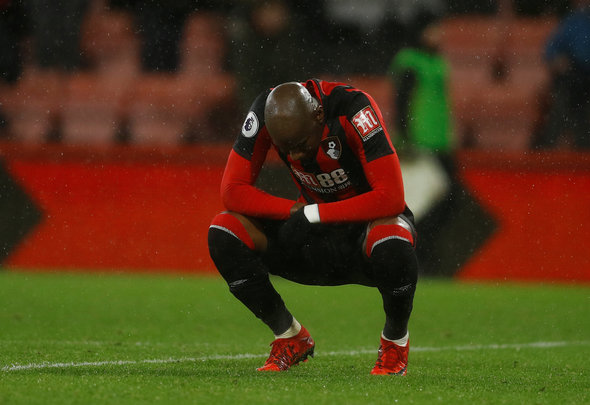 Wolves fans have been left blown away on Twitter after advanced talks kicked off to re-sign Bournemouth forward Benik Afobe.
Football Insider has exclusively revealed that the Championship title favourites are looking to tie up a late loan deal to sign Afobe, 24, until the end of the season with an option to buy in the summer.
There has been major interest in Afobe, who left Molineux in 2016 for £10million in order to sign for the Cherries, but he is now on the verge of re-signing for the Black Country club in a sensational deal with just days to go before the January transfer window slams shut.
The forward has found life tough this season on the south coast though, amid reports of a bust-up with manager Eddie Howe and with him stating just five Premier League fixtures.
Wolves fans would be buzzing to see Afobe return to the Midlands though and have taken to Twitter to rave about the imminent deal.
One supporter claimed that the signing would be “perfect”.
Here is a selection of their tweets:

Please let this be true

At last! Been amazed we haven’t bought him back yet

Lifetime ban for anyone who doesn't want Afobe back

Afobe has made 22 appearances in all competitions for Bournemouth this season, scoring one goal.
In his previous stint at Molineux, the ex-Arsenal striker scored 23 times in 48 total appearances.
In other Wolves news, the club are in the hunt for this Newcastle forward after he lodged a complaint.
We’ve launched a << BREAKING NEWS FEED>> exclusively for your club. ‘Like Us’ on Facebook by clicking here if you want 24/7 updates on all Wolves breaking news.