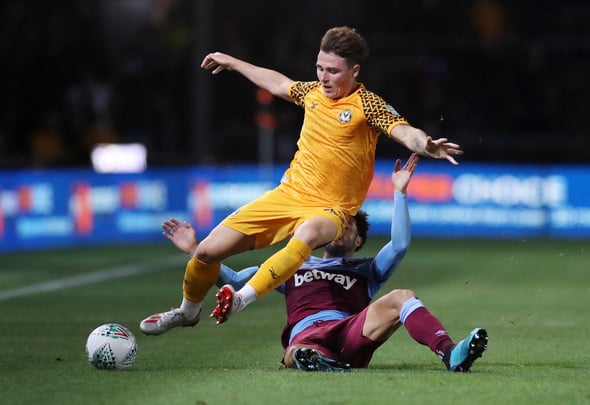 Darren Bent has revealed he thought West Ham attacker Felipe Anderson should have been brought off against Newport County despite having joined the game from the substitutes’ bench.

Speaking exclusively to Football Insider, the former Aston Villa and Tottenham striker says that he was worried about the Brazilian forward picking up an injury against the Welsh side and suggested Manuel Pellegrini should have hooked him once the game looked to be won.

Anderson came off the bench in the opening 10 minutes of the League Cup tie after Michail Antonio picked up what appeared to be a hamstring injury, helping his side to a 2-0 victory at Rodney Parade.

However, Bent has suggested that the frustrations of the Newport players could have seen Anderson, or another of the Hammers’ stars, left worse for wear.

Bent told Football Insider: “I was watching the game and I saw Anderson playing, I was like: ‘Wow, eventually they need to get him off.’

You know what it’s like with some of these players when they’re losing, they just think: ‘I’ll just try and leave one on somebody.’ So you need to be careful. He was professional as well, did what he needed to do, get himself out of harm’s way.

“There were probably a couple of players out there who played a little bit longer than they needed to.”

Anderson has only recently come back from a minor injury problem of his own, missing the 1-1 draw against Brighton before returning to the side in the 3-1 win over Watford.

The Irons’ next game sees them take on Norwich City, who suffered an upset at the hands of Crawley Town on Tuesday.

In other West Ham news, Danny Mills has claimed to Football Insider that the Hammers are in crucial talks over the future of one of their star players.