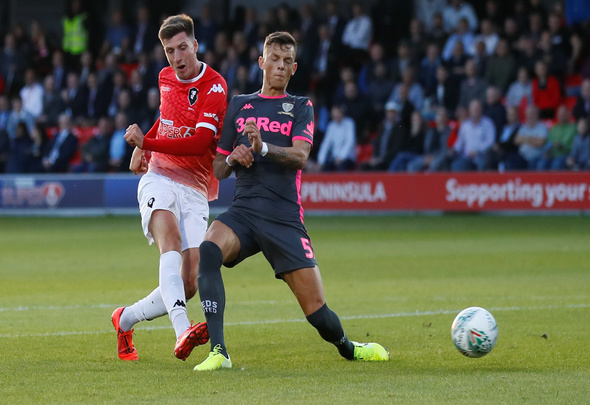 Noel Whelan has revealed that he could tell Leeds United defender Ben White was going to be a quality addition for the Whites in his very first appearance for the club.

Speaking exclusively to Football Insider, the former Leeds striker and lifelong supporter of the club says that he could see something special in the 21-year-old from the very start of his career at Elland Road, having joined on loan from Brighton over the summer.

White has established himself as one of Marcelo Bielsa’s first-choice defenders alongside Liam Cooper, taking the place of Pontus Jansson in the heart of the back line after the Swede’s move to Brentford.

Whelan has revealed it did not take long for the Brighton loanee to impress him with his performances, admitting he was blown away from the very first game he watched with White at the heart of the defence.

Whelan told Football Insider: “I think from the first day he walked in, from the first game I saw him play I was like ‘Wow, this kid is good,’ and you can see why Bielsa went out to get him.

“He’s fit in perfectly well, he seems like a good character which more to the point means he wants to learn and will learn off Marcelo Bielsa. I think it’s good for both parties.

“He’s been spectacular since he’s joined the club. Composure and calmness, you can see he’s going to be a really good player in the future.”

White has played in every single one of Leeds’ matches across all competitions this season, his substitute appearance against Stoke City in the League Cup the only time he has not started and played the full 90 minutes.

He has not made a single first-team appearance for parent club Brighton to date, with loan spells at Newport County and Peterborough in recent seasons.

In other Leeds United news, Football Insider can reveal that Bielsa feels one Whites star will be worth in excess of £30million in 2020.