Arsenal legend Ian Wright has admitted he is “jealous” and “afraid” of Tottenham’s progress after their Champions League victory over Real Madrid.

Mauricio Pochettino’s side outclassed the European champions 3-1 at Wembley last night to book their place in the last 16 of the competition.

Their victory has made everyone in football sit up and take notice and Gunners legend Wright has voiced his concerns as an Arsenal supporter.

“This is a great manager with great, young, ambitious players. They’re not fly by night players, they look like they’re the real deal.

“It’s something as an Arsenal man, sitting here, it’s a frightening prospect seeing their progression, it really is and jealousy does come into it.”

"It's frightening seeing #THFC's progression – and jealousy does come into it!"@IanWright0's worst nightmares might be coming true 🤣 pic.twitter.com/O8sMLpNxwM

Spurs have challenged for the Premier League title in the past two seasons and last campaign finished above their North London rivals for the first time in 22 years.

Pochettino’s side totally outplayed Madrid last night with two goals from Dele Alli and a composed finish from Christian Eriksen.

Tottenham are unbeaten in this season’s Champions League with three victories from their four matches.

Their focus in Europe now turns to winning the Group H when they face Borussia Dortmund on November 21.

The Gunners face race Red Star in the Europa League at the Emirates Stadium tonight.

In other Tottenham news, fans were last ecstatic on social media after this 21-year-old’s performance against Real Madrid. 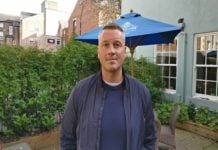