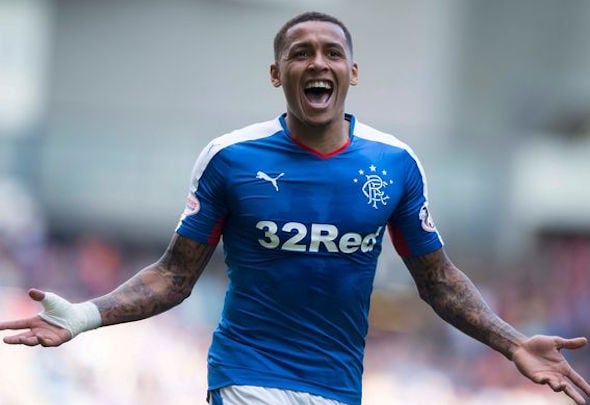 By Richard Parks
Rangers fans have taken to Twitter to express their delight after it emerged that James Tavernier is set to sign a new three-and-a-half year contract at the club.
The Four Lads Had a Dream Twitter account, which has emerged as a reliable source of news about the Glasgow giants, broke the news on Monday afternoon that the right-back, 27, is “expected” to put pen to paper on fresh terms that will tie him to the club until the summer of 2021.

James Tavernier expected to sign a new 3.5 year deal until 2021

Tavernier’s current deal expires in the summer of next year and there has been speculation that he is keen on a return to his native England.
But the Four Lads Had a Dream revelation was followed by a number of reports from the established Scottish media, who also ran the line that the deal will run for three-and-a-half years on improved terms.
The original tweet breaking the Tavernier news prompted a stampede of excited and delighted messages from Rangers fans, including hundreds of celebratory GiFs.
Here is a selection of their messages on Twitter:

Outstanding news. Now let’s get him a song.

Superb news, hopefully no stumbling blocks to finalising….a player who has improved massively in past year????????

Tavernier has played some of the best football of his career this season and has established an excellent rapport on the right flank with Daniel Candeias.
His forward raids are an integral part of Rangers’ attacking player and it is a huge achievement that an ostensibly defensive player has scored six goals and supplied eight assists from 32 matches this season.
In other Rangers news, ‘Great move,’ ‘Seriously good player’ – Rangers fans react after agreeing emergency loan deal.
Don’t miss out on breaking and exclusive Rangers news by clicking here for our brilliant 24/7 updates on Facebook, Instagram and YouTube.