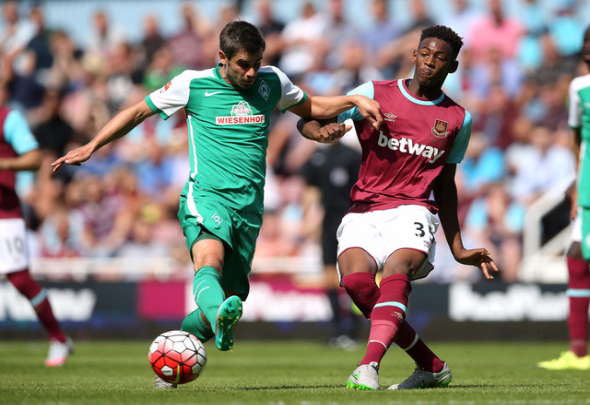 Football Insider has named West Ham’s young player of the year for 2016.

Highly-rated youngster Reece Oxford is West Ham’s best young player of 2016. The 18-year-old made a shock breakthrough at the start of last season, and has since established himself as an important part of West Ham’s first-team squad.

In a topsy-turvy year for the Hammers, the emergence of Oxford has been without doubt one of their most memorable moments. He may not have played many games this calendar year because of injury, but from what we’ve seen from Oxford, he’s a real talent.

Since making his Premier League debut for West Ham he has remained undaunted by the rigours of the top-flight, and has shown he can cope with some of the league’s best talents.

An injury has seen Oxford restricted to just three appearances in all competitions this season, and he has yet to appear in the Premier League. But it has not weighed-down the importance of Oxford to the club, and it shows in the new four-and-a-half year contract he signed earlier this month.

The English wonderkid already has so much to offer. He is a composed individual, technically sound, and a skilful player. There are also plenty of physical attributes in his arsenal.

He has an excellent footballing brain, and knows how to operate in a variety of different roles. His versatility has seen him deployed as both a centre-back and a holding-midfielder, and he will no doubt have a crucial role to play throughout the remainder of the season, as it is one of West Ham’s biggest problem areas at the moment.

The important thing though, is for him to keep his feet grounded. The manager has faith in his ability, and Oxford himself knows where his potential can take him. But it is key that he focuses on his football, and takes each performance as it comes. He really can be a Premier League star.

His lack of game-time this season through injury has been a major disappointment to the player’s development, but he will no doubt hit the ground running again, just like he did against Arsenal on his Premier League debut a year ago.

In other West Ham news, the Hammers are leading the race to sign this Premier League goal-machine.