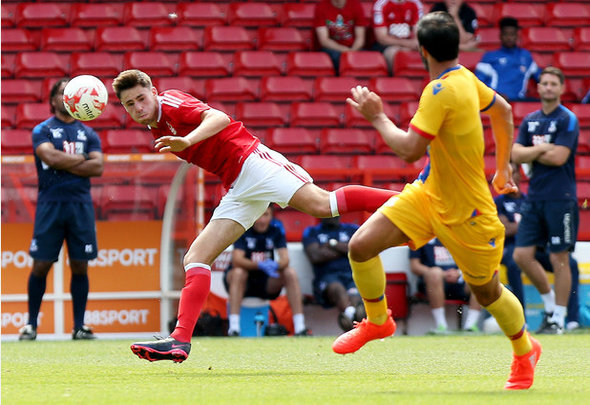 Nottingham Forest striker Ben Brereton is being targeted for a shock move to the Premier League, with Liverpool scouting the 18-year-old, according to a report.
The Liverpool Echo claim that Jurgen Klopp is scouting the young forward, following his stellar display in the FA Cup against Arsenal.
Brereton, who helped Forest knock out the FA Cup holders Arsenal on Sunday by scoring a penalty, is said to be on the radar of multiple Premier League clubs – however it is Liverpool who are the bookies’ favourites to land the young Englishman.
The 18-year-old has had success for the Young-Lions this season, scoring four for the England under-19’s in his 12 caps.
The Liverpool Echo report that Oddschecker has seen an influx of bets on the destination of Brereton’s new club being Liverpool, with a massive 55% of punters betting he will become a red in this window.
Football Insider verdict:
Ben Brereton is a promising talent, he is young, full of energy, and as evidenced by Sunday’s FA Cup fixture, lightning fast. World Cup winner Per Mertesacker could not contain the 18-year-old, as Forest dumped Arsenal out of the cup with an emphatic 4-2 victory. Brereton’s club form has not been brilliant, only scoring three goals this season, but his potential in undeniable. The Liverpool link makes sense, as it has also been reported that the Reds are going to sell Daniel Sturridge this January. Klopp could view Brereton as a long-term successor to the England international.
In other Liverpool transfer news, the Club have been handed a huge boost in their pursuit of this European star.
We’ve launched a << BREAKING NEWS FEED>> exclusively for your club. ‘Like Us’ on Facebook by clicking here if you want 24/7 updates on all Liverpool breaking news.