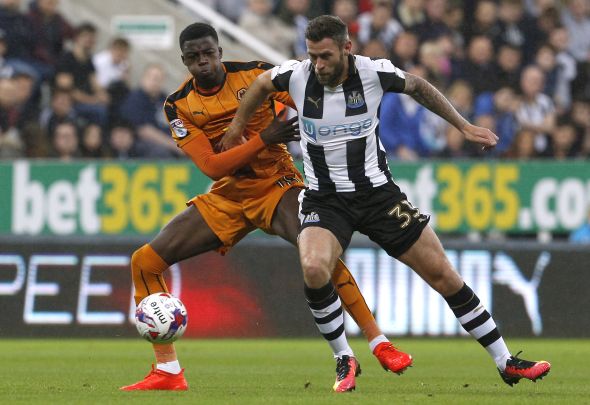 Newcastle striker Daryl Murphy insists he would like to stay at the club until the end of his deal.

The 33-year-old has 18 months remaining on his contract at St. James’ Park, and has played largely a backup role under Rafa Benitez.

He only joined Newcastle from Ipswich in the summer, but immediately slipped to third-choice behind fellow goalscorers Dwight Gayle and Aleksandar Mitrovic.

Both Gayle and Mitrovic are currently out injured, which has allowed Murphy to get a rare opportunity in the first-team, and the Republic of Ireland international has grabbed his chance with both hands.

He has now scored three goals in his last four appearances since coming into the side, which will give Benitez food for thought when his premier goalscorers return to action.

However, it remains a strong possibility that Murphy could drop back into his backup role when top goalscorer Gayle returns, which has sparked speculation over his long-term future with the Magpies.

But the veteran striker has quashed talk that he may be looking to jump ship, instead insisting he was in it for the long haul.

He told the Chronicle: “First and foremost it was about getting a chance and helping Newcastle win promotion.

“That was the main aim; still is. If we do, we will see what happens then.

“Of course I’d like to stay. I have got another year so we will see.”

Despite starting Newcastle’s first four Championship games this season, he did not get another opportunity until January, where he played just three minutes as a substitute in a defeat to Blackburn.

He finally netted his first goal for the club in the FA Cup third round meeting with Birmingham, his first start for the club following his lengthy absence from the first-team.

His recent form comes as little surprise though, having established himself as a proven goalscorer in the Championship. During his seven years with Ipswich, he netted 67 goals from 221 appearances.

There is no need for Newcastle to consider selling Murphy, and no need for Murphy to consider quitting the club. Even if he does make way in the first-team to allow either Dwight Gayle or Aleksandar Mitrovic to return, he has still be an important asset to Newcastle’s promotion cause. He has scored important goals, and if the Magpies get promoted back to the Premier League for next season, Murphy will have played an important part in it. He may not boast such a good goalscoring record in the top-flight, but can still do a job for Benitez as a squad player, as showcased this season.

In other Newcastle news, the club have made a fresh approach in their pursuit of this Premier League winger.