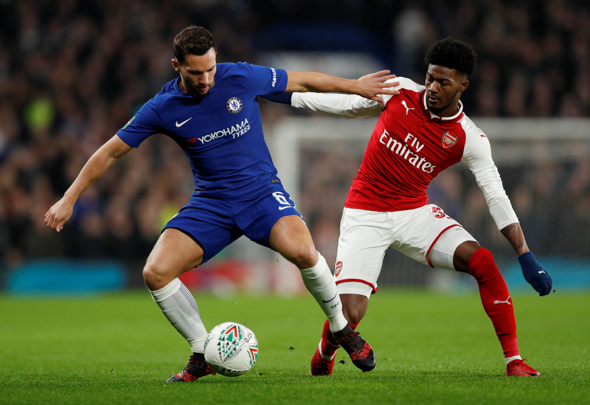 Arsenal put in a creditable performance against Chelsea in the first leg of the League Cup semi-final at Stamford Bridge on Wednesday night.
There was a shock for Arsenal fans before a ball was kicked after Alexis Sanchez was left out of the starting XI, probably signifying the end of his tenure at the Emirates.
Man City have been heavily linked with a January move for the player and it looks likely that he’ll join the runaway league leaders now.
Given that distraction, Arsenal fans were happy with a draw after Chelsea dominated play in the second half of the match but couldn’t break down a resolute (and occasionally lucky) Gunners defence.
Ainsley Maitland-Niles made his 17th appearance of the season for Arsenal and he put in another confident display, making Arsenal fans confident that they’ve got a real prospect on their hands.
Here is a selection of the best tweets from Arsenal fans:

Painfully obvious that Maitland-Niles / Wilshere would be an excellent partnership in midfield.

Ainsley Maitland Niles had been very impressive. Does his job well especially when Hazard cut inside. Great talent.

Maitland Niles is better than half of our squad. Fact!#afc #CHEARS

The composure of Maitland-Niles is excellent. Really like this kid a lot.

In other Arsenal news, it has been reported that the Gunners are ready to trigger the release clause for this Argentine star.
We’ve launched a << BREAKING NEWS FEED>> exclusively for your club. ‘Like Us’ on Facebook by clicking here if you want 24/7 updates on all Newcastle United breaking news.