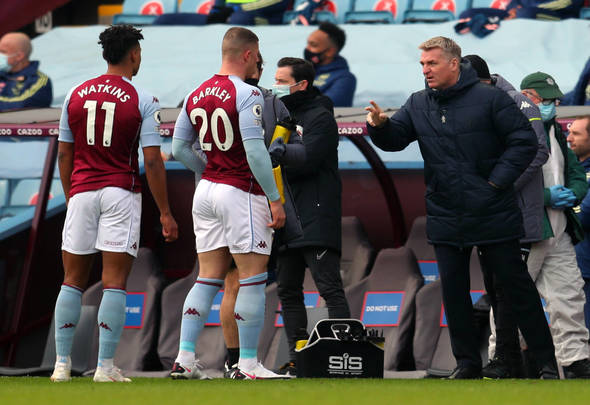 Aston Villa boss Dean Smith is not giving Ross Barkley the necessary minutes on the pitch to turn his poor form around.

That is according to ex-Premier League goalkeeper Paddy Kenny, speaking exclusively to Football Insider about the on-loan Chelsea midfielder.

Barkley, 27, has not played 90 minutes in the league since January and has been named on the bench for Villa’s last seven matches.

Football Insider revealed in March that Smith is unconvinced that Barkley is worth Chelsea’s £35million asking price.

Kenny claims that Barkley has effectively been backed into a corner by Smith and cannot prove himself unless he is given more game-time.

“Barkley hasn’t been playing much recently and he’s struggled but he started well when he first arrived.

“There isn’t much you can do when you’re only getting 20 minutes. For any player coming on with not long to go, it’s hard to make an impact. Ask anyone.

“He needs more game time. It’s so difficult when you don’t have the time on the pitch to prove that you’re good enough to be in that team.

“If the manager’s not picking you, what can you do? You can probably try too hard sometimes when the manager is only giving you a limited time on the pitch.”

But after a promising start, he has flatlined, though Villa chief executive Christian Purslow was still keen on a permanent deal in mid-March.

In other news, Aston Villa ready to go toe-to-toe with West Ham in race to sign Lingard.