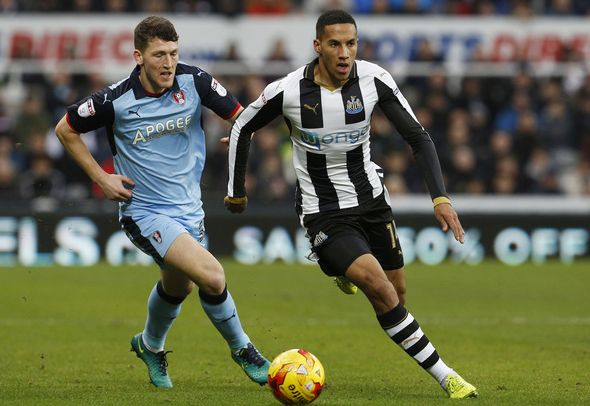 Rafa Benitez has confirmed that Newcastle are to be without Isaac Hayden for the next month.

The crucial midfielder underwent ankle surgery on Friday in a bid to be back to full fitness ahead of Newcastle’s crucial final months of the Championship season.

The 21-year-old could miss five games for the Magpies which include massive away trips, which could decide the promotion race, against Brighton and Huddersfield.

Benitez admitted that Hayden was a key part of his team and was improving throughout the season.

“He had a little problem with his ankle that we were trying to manage,” Benitez said to the Shields Gazette. “But in the end he was not comfortable with it and we had to do the operation. He was doing well, and was a key player for us. Now, we have to cope with the others.”

Vurnon Anita is expected to return from his injury lay-off ahead of Monday night’s meeting with Aston Villa.

The versatile Dutchman, who can play at right-back or in the midfield, returned to training on Friday.

Benitez believes that he is lucky that Anita is back and available in the wake of the news about Hayden: “We are losing one player that was playing, but we are gaining one that was doing well when he left,” he said.

“He was playing as a right full-back, but he is also a player who can play in three positions and understand the game.”

Hayden has made 32 appearances for Newcastle in all competitions this season. He has been a key part of Benitez’s midfield playing alongside the likes of Jonjo Shelvey and Jack Colback.

The former Arsenal man, who moved to St. James’ Park in 2016, put in a man of the match performance in the 2-2 draw with QPR at the start of February in which he bagged an assist.

In other Newcastle news, fans react to Karl Darlow blunder in the Norwich draw.