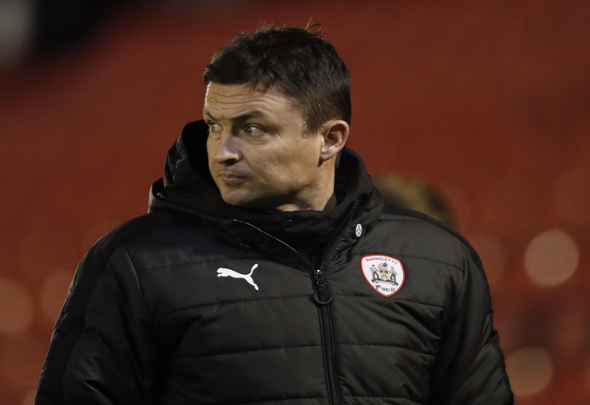 Barnsley manager Paul Heckingbottom has been installed as second favourite for the Nottingham Forest job, according to the latest bookmakers’ odds.
PaddyPower have the 40-year-old priced at 7/2 to succeed Mark Warburton in the City Ground hotseat after the ex-Brentford and Rangers manager was sacked on New Year’s Eve following a poor run of form.
Aitor Karanka (4/5) remains the odds-on favourite to be the next Forest boss while former Leeds boss Garry Monk (7/1) is also in the running.

Heckingbottom has done wonders in the hotseat at Oakwell since he was appointed as manager in June 2016 after he won the League One play-offs and the Football League Trophy in 2015/16 while in caretaker charge.
The Daily Mail has since reported that the Barnsley manager has been considered to replace Warburton by the board at Nottingham Forest, however he appears to be a clear Plan B should their pursuit of Karanka not work out.
It is understood that initial talks have been held between Forest and the former Middlesbrough manager, although the East Midlands club are yet to gauge whether or not he would be interested.
Heckinbottom is said to have some admirers in the boardroom at the City Ground, and that is perhaps why the bookmakers installed him as second favourite to Karanka.
In other Nottingham Forest news, a Sky Sports pundit lost his mind over the performance of this “outstanding” 26-year-old in the Leeds clash with Forest.
We’ve launched a << BREAKING NEWS FEED>> exclusively for your club. ‘Like Us’ on Facebook by clicking here if you want 24/7 updates on all Nottingham Forest breaking news.