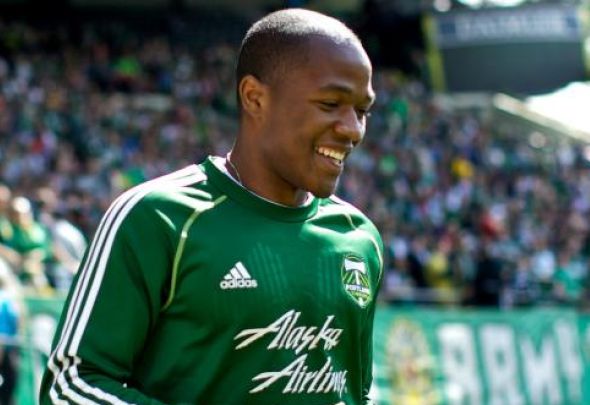 Celtic are considering a £1.5million offer for Portland Timbers playmaker Darlington Nagbe, according to a report.

The Daily Mail claim Nagbe was given a Stadium tour of Parkhead yesterday, and is in Glasgow tonight to watch the Hoops take on Barcelona in their Group C Champions League clash.

It is said that both parties are interested in completing a deal and Celtic will use his trip to Glasgow to try and thrash out a move for the USA international.

Wearing the number six shirt for Timbers, Nagbe impressed despite his side’s disappointing campaign, as they finished seventh in the Western Conference of the MLS this season.

Although he is not known for his goals, the 26-year-old has a reputation for impressive work rate, speed, and ability to connect a midfield and attack.

Now with 10 USA caps after his debut in November 2015, Liberia-born Nagbe scored his first international goal against Ecuador during a 1-0 win back in May.

Nagbe was also part of the 2016 MLS All-Star team that lost 2-1 to Arsenal during pre-season, as the 26-year-old lined up alongside the likes of Didier Drogba, Sebastian Giovinco and David Villa.

Australian international Tom Rogic is currently considered first choice by manager Brendan Rodgers in the advanced midfield role. The signing of another playmaker, though, is likely to spell the end for attacking duo Kris Commons and Nadir Ciftci.

The report also claims that Crystal Palace’s Jordon Mutch is on the Celtic radar, but would cost another £2million more than Nagbe.

Rodgers would be pulling off a shrewd piece of business if he was able to capture the MLS star, who is at the peak of his career with the Timbers. With a total of 209 appearances for the Timbers as well as a regular in the USA squad, Nagbe has proved that he is a capable midfielder and, at £1.5million, he would be a bargain. A deal for Nagbe would a be a lot smarter than paying £3.5million for Mutch, who has made just one, 10-minute Premier League appearance this season. Although untried in Europe, Nagbe is in the form of his life and at £2million cheaper than Mutch, the deal appears viable for Celtic.

In other Celtic transfer news, this is why the Hoops should reignite their summer interest in this Premier League star.