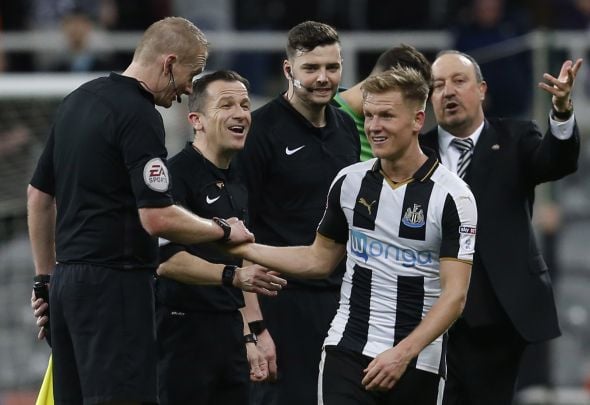 Michael Gray believes Sheffield Wednesday’s Barry Bannan should have been shown a straight red card for a tackle on Matt Ritchie during Newcastle’s 2-1 loss.

Goals from Wednesday’s Tom Lees and Steven Fletcher secured a surprise 2-1 win over second-placed Newcastle at Hillsbrough on Saturday, leaving the Toon in second place.

However, with the score still at 0-0 and the game only 18 minutes old, 27-year-old Bannan was late in a 50-50 tackle with Ritchie, showing his studs with both feet.

Speaking on Football on 5’s broadcast of the Championship highlights on Saturday evening, former England defender Gray claimed Bannan was lucky not to receive red.

“You wouldn’t like that across your ankles. I think he is very fortunate to escape with a caution. He’s shown his studs and that is very nasty,” Gray said.

“It was a terrible challenge. The ref came across and looked like he was going to give him the red card, but he is very fortunate to only get a yellow for the challenge.”

Midfielder Jonjo Shelvey secured a late consolation with two minutes remaining on the clock, but the loss saw the Magpies drop to second after Brighton beat QPR 2-1 on Friday night.

With the match still deadlocked at 0-0, the end result could have been hugely different if Bannan had received a red card and could now prove pivotal in who goes up as Champions.

Newcastle next face play-off contenders Leeds at St. James’ Park on Friday night, and could go back to the top if they secure three points and Brighton lose away at Wolves.

In other Newcastle news, this £10million-rated winger has reportedly been made the Toon’s top transfer priority ahead of the summer transfer window.