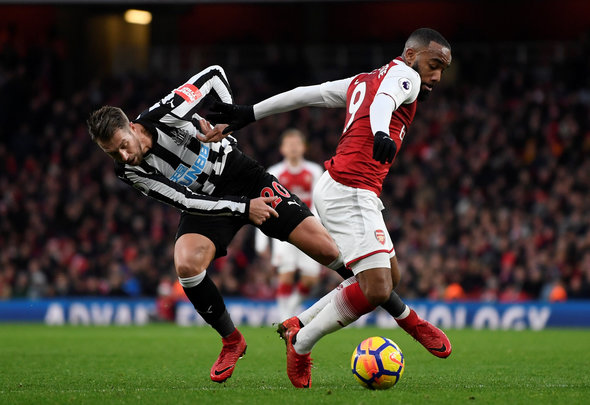 Everton ran out 1-0 winners in a really poor game after a Theo Walcott goal in the 51st minute, but Newcastle fans got some consolation on the night from the display of 26-year-old Florian Lejeune.

The enforcer put in a brilliant no-nonsense performance and Newcastle fans flocked to Twitter to sing his praises.

One fan said that he was the best player on the pitch, while another said he’d been class for a while and was “class again today”.

Here are the best reactions from Newcastle fans to Lejeune:

LeJeune was our best player for me tonight.

Lejeune has been class for a while

Lejeune was the best player on the pitch. Made more blocks, headers, passes, interceptions than I could count.

Diame MOM for #nufc again by a country mile, Lejeune and Dummett worth mentions. Everyone else pretty awful to be honest. Felt a bit sorry for Slimani, bit of a thankless task at times being our centre forward especially when we play like we did tonight.

@NUFC_Index Lejeune and Diame were excellent I thought, but that’s about it #nufc

A flat performance in a poor game.
Love Dubravka but he needs coaching on when to come for crosses.
Diame hard working as normal.
Kenedy class.
Lejeune was immense.
On to the next one. #nufc

Despite the loss, Newcastle sit in 10th place in the Premier League with four games to play.

They’re three points ahead of Bournemouth in 11th, who have played one more game, and it looks like Rafa Benitez has over-performed with the squad he has got.

All worries of relegation have disappeared after the four wins in a row and Newcastle fans are looking forward to bagging new recruits in the summer.

In other Newcastle news, ‘Given us back our club’, ‘Unbelievable’ – Newcastle fans react to Benitez Twitter message