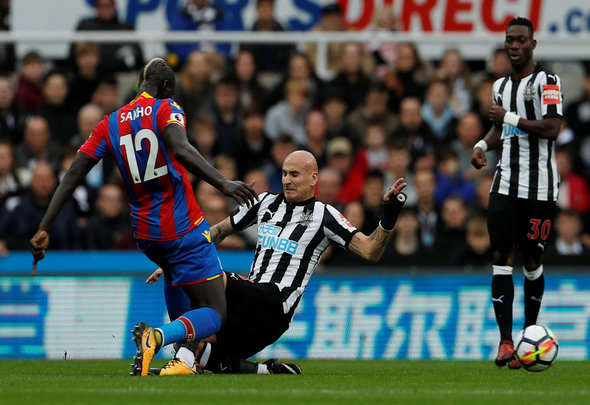 Newcastle United manager Rafael Benitez has confirmed the club are in the dark over the condition of Jonjo Shelvey and his knee injury as they await scans to return.

The midfield maestro was ruled out of Saturday’s game against Liverpool with the blow, which was revealed to be an ongoing issue for the 26-year-old as it flared up in the 2-2 draw with Bournemouth last weekend.

However, Benitez could deliver no update on when he would return as he confirmed that they were still awaiting the results of tests, despite the player’s desperation to return to the training pitch and join in with the first team action, which will leave the manager and his team mates sweating.

The Spaniard was quoted by the Chronicle on their live blog of his press conference (02/03, 12:21): “Jonjo Shelvey has a knock to his knee and he will not be available.

“We are waiting on the results of the scans. We don’t know how serious it is. He wants to train and play but we have to check.”

The fact that the club are requiring scans to confirm just how much damage has been done is not a good sign, and it could suggest that there is an ailment which cannot be judged from the club’s medical staff. The knee is complex and it could be a number of issues, from cartilage to tendons and even the bone itself, so it is important the club do take their time to identify the issue and get him on the road to recovery as soon as possible. In terms of an injury, it has come at quite a good time, as after the clash at Anfield, there is just one more game before a three week break between fixtures, which Benitez will be hoping is enough time to get Shelvey back to full fitness.

In other Newcastle United news, the fans are set for a surprise after an official first team update.